Because I have become completely over the top,
I purchased a white artificial tree with pink lights, pink ornaments and pink beads, for 75% off, following Christmas last year. Perfect for two, spoiled girls.
This afternoon, the idea was to let the girls 'mostly' decorate their tree, so they would 'mostly' leave me to neurotically color coordinate my decorating.
I tried my best, to ignore the bulb grouping... but let's get real, I have already been in their room twice, to move them around. 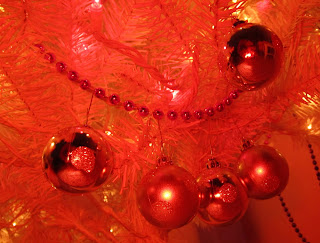 I had purchased the most adorable, pink glitter 'Merry' and 'Christmas' to place near the top. The tree looked super, Pepto Bismol cute. Except later.... 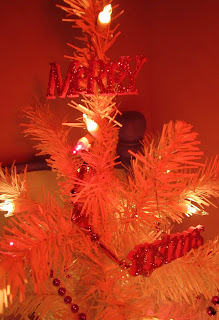 Upon further review...
The 'Christmas' appears to be missing something.
Though it was returned exactly to the previous spot. 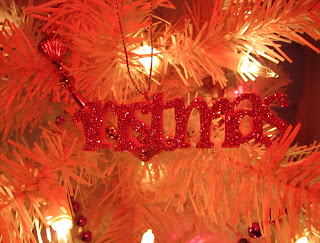 After MUCH questioning, we are certain, Coco is the culprit. Unfortunately, we have not recovered the 'Ch'.
Seriously...
What the heck did she do with the 'Ch'???
Posted by Tru Stories at 8:28 PM

Email ThisBlogThis!Share to TwitterShare to FacebookShare to Pinterest
Labels: Coco

You might want to look in her diaper tomorrow.