Tink is Thankful for:

At Tink's preschool Thanksgiving dinner, our table marker was created by our daughter. Each child designed signs, listing what they were most Thankful for, in their life. Tink's read: 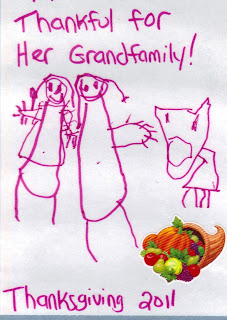 First: Yes, that is a picture of her Grammy, Pop-pop and her old dog Desmond (which you'll remember was banished for not playing well with others.)

Second: No. The mother, whom is with her nearly every hour of every day... was not listed.

Third: You'll note Grammy is obviously wearing a sheer shirt... as you are still able to see her belly button.

I would almost hate this sign.
If Tink wasn't so adorable later:
When she lost her first tooth!! 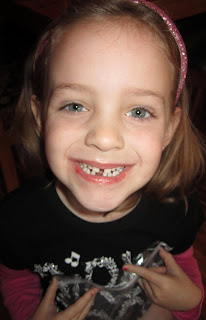 Tink was incredibly excited the next morning, after a REAL LIFE fairy had been in her bedroom! Leaving pixie dust under her pillow and on the money!!

The Convo Between Husband and Wife later:

Me: Welp... that's it. Now she is all grown up. Teeth are just falling out of her mouth.

Me: Why??? She was JUST our tiny little baby, days ago. Too tiny to grow up and lose teeth!

Me: Next she'll be in high-school. Driving the car and having a boyfriend.

Me: We're just gonna have to get another baby. Let's adopt one this weekend.

Email ThisBlogThis!Share to TwitterShare to FacebookShare to Pinterest
Labels: Tink

This is going to be confusing for people. How did she lose her first tooth and there are two gaps.
People she lost her bottom tooth. Popop kept telling her last night when she loses her top teeth big teeth will grow in and close up that gap. Or an orthodontist!

She told me two years ago she lost her top tooth. I know you're against it, but I love the original gap. Just added to her already dynamic personality! Congrats, Tink, on finally being able to tell people you lost a tooth without your mom correcting you.

Tink also told me she lost her top tooth...it's ok Tink. I've been there. Maybe you'll get lucky and get braces before your senior year of high school. OR maybe you'll rock it for life like your Uncle Warhol...I hear it's making a comeback.

A.) Was it really too much for you people to just say Congrats... and not emphasize the 'first lost tooth gap'??? It's already as plain as the Gap on her face... do we really NEED to talk about it on her comment section?

B.) Sweetbreads: 'rock it for life like Uncle Warhol'?? Rock it?? You are so in-love it's sorta icky.

Coach is right... the idea of her having a boyfriend soon, probably is dumb.

Laughing so hard from hollahol.
Nice to see the gap was able to take the attention away from the fact my husband seems to have pigtails.

You're right, Tru Stories. Their love is totally icky.

I was not going to comment, but it got to me. I grew up with a gap. I also knew it was a sign of being sexy and being full of wisdom. I quit smiling in my later years, why, because my sister had it also and hated it. I learned to hate it with her. I married a man(sexy) and have been loved by him for 43years. Then I had a grand daughter who has it. ( Cute as a button)I had begun to smile and was very comfortable with my God given looks and then the talk began in the family. I unconsciously slowed down on the smiling. I am proud of my son who accepts it. Not once did a dentist ask about fixing it. My sister fixed it. It looks artificial to me. But that was 50 years ago. It is no different than the moles on your face(beauty marks). Those who do not have these things are either fortunate or unlucky. It does build character. Sorry about the exortation,but the less said in front of Tink the better because if you do fix it, it may be a while. Love you all, gap or no gap. Gramma G

While I respect and applaud Gramma G's right to defend her own... and I am proud of her, for standing up for herself...
was anyone else disturbed, by the number of times she used the word 'sexy'?? I was unaware that was so freely in her vocabulary.

Still... the comment was very Beyonce of her... Stand up and shout!

I think she looks cute without the wiggly tooth on. Oh, please stay that way little lady! Your momma's very lucky to have an adorable and sweet girl like you! =)