Last week, I felt a shift in my relationship with my brother. A jolt in the plates of my family, so slight the people around me may not have registered. Yet, significant enough to my energy, I could almost feel my soul shudder. Wednesday evening, I went with my mother to visit Joel. He called twice, asking for me. He took me to his room. He was extremely disoriented. Very distraught. Paranoid and physically unwell. When asked later about the visit, I could only verbalize:
"It was the worst thing, I have ever seen."
I'm sure to the precious few whom (gratefully) continue to ask, my response was vague and confusing. What was the worst thing I had ever seen? What did that even mean??

After giving myself a few days to absorb the past week, I understand my statement. The following evening after my visit, my brother 'voluntarily' signed paperwork to commit himself to 90 days in the State Mental Facility. Yes, this (fingers crossed) will be a positive step in Joel's struggle. Yet, the shift I spoke of was so quick... so minuscule... such a flash... others may not have noticed.

Joel is currently taking 17 pills a day, for schizophrenia. Pills to help him relax, to help him sleep, pills to help his mind desperately find clarity. For a body to digest this much medication, presents a long list of uncomfortable side-effects. His jaw is locking, his joints are stiff, his body is shaking uncontrollably.
We were visiting during dinner. I carefully watched him eat. He was primal as he consumed his meal, devoid of the common table manners installed in us as children. His hands gripped his food with such controlled deliberation. Obviously requiring his full concentration... simply to eat a meal. When he raised his coffee, his jitters caused him to spill on himself.
What was the worse thing, I had ever seen?
I saw my little brother's future. 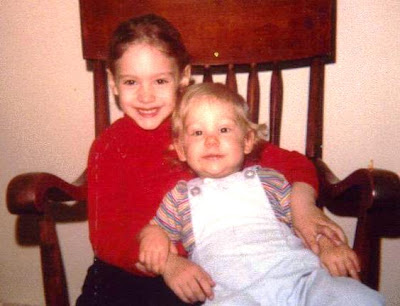 Joel was once so handsome. A shock of blond hair. A bright trouble-making smile with a glint of mischief in his eyes. Joel was much more full of life, than I. He was interesting and magnetic. He was a brilliant shooting star, while I remained boringly calm, feet planted in the ground. He was four years younger than I and still, he could command attention. Joel grew taller, stronger and grabbed onto life with more unbridled enthusiasm, than I could imagine.
I understand, his unapologetic 'zest' was likely an early symptom. Fifteen years ago it was an envy-worthy character trait, which made him posed for greatness. Joel's intelligence, athletic abilities, fearlessness and popularity presented him with endless possibilities.

Wednesday night, Joel appeared hopeless. He looked much older. I sat close to him, he let me touch his hand. I noticed grey hair. His over-medicated body was wrapped in a blanket. My stomach felt ill, imagining this scene playing over again in 30 years. Just Joel and I. One day, we will be what remains of our family. I will likely become his care-giver. Just the two of us, with only my set of memories.

One saving grace over the last ten years, appeared to be the mostly happy and safe world Joel had created for himself. Joel designed a small environment, with a few close family members. He enjoyed mowing the lawn, watching sports on TV and visiting with his nephew and nieces. He seemed to freeze himself in time. He never appeared depressed. He never mentioned the ugly side of this disease, which eventually encourages it's victims to take their lives. We assumed, he was comfortable within his mania.

In the last month, Joel has been aggressive with my parents. He has crushed them verbally, claiming they were bad parents. He accusing them of abusing him and making him become like this. Obviously, his accusations have crushed my mother. She is heart-broken, Joel is unable to remember how amazingly happy we were, as a young family.

With me, Joel has been more direct. His thoughts continue to scramble but he has voiced painful observations, making it clear he is struggling under the weight of his fate. In the last few weeks, he has cried to me. His deep grown voice, has cracked repeatedly. He confided, he thinks I am embarrassed of him. That I prefer the company of Coach's siblings. He is upset, he does not have a wife, a home and children of his own.

Wednesday evening, as he argued incessantly with my mother, over a belt (he is unable to wear a belt with his jeans, in the institution) he became more agitated as he went back and forth with her. Finally, I interjected "Joel, they will not let patients have a belt, because they are afraid you will hurt yourself."
Without hesitation he responded "If I were going to hurt myself, I would have done it a long time ago."

The very idea, he understood harming himself was an option, was shocking to me. I had always hoped the world Joel created, protected him from such feelings. I honestly believe, my brother manifests memories of a poor childhood, as a mask. How could he live with the memories of how amazing he was? How could he wake-up each morning under the weight of the friends, possibilities and the future he has lost?

I imagine, the worst thing my brother has seen over the last few weeks of his extraordinary mental break, must be his own depressing reality. Honestly, how do schizophrenics find the strength or will, to forge ahead? Hopefully, a little bit of that unbridled life-grabbing enthusiasm remains in Joel's character. Enough to put himself back together.
While Joel, his team of doctors and my parents continue the daily fight of trying to find peace.... I have resolved to calmly maintain a sense of normalcy. Joel is an Uncle. A job he has flourished in. Yesterday, my children drew Uncle pictures. Tink made rainbows, Coco scribbled happy purples and reds and Joel's god-son drew (surprise) a ship. 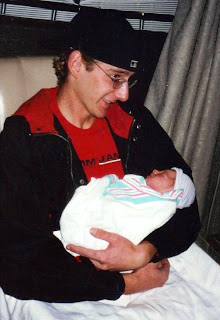 (Uncle Joel and baby The Kid) 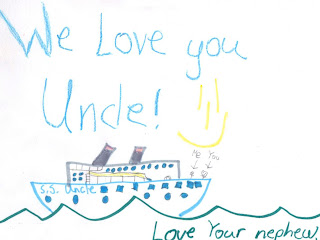 If we are a cornerstone of Joel's future. It's time for me to pick myself up and start walking down this road. Am I pleased, God has chosen this path for me?
Hellz no... but He has.
Please continue to send your prayers and positive wishes towards my family. I'm afraid we will need them, for quite some time.
Posted by Tru Stories at 12:56 PM

Email ThisBlogThis!Share to TwitterShare to FacebookShare to Pinterest
Labels: My Brother's Struggle

It really feels like all of this is happening at this time for a reason. I know we are a part of a bigger plan.
To all of you that continue to pray, give us your love and support it helps so much.
Thanks.

We are offering up prayers, not only for Joel and his family, but for his doctors and his caretakers as well. Love and prayers. Gramma G

I've said it before, and I'll say it again: Joel is very lucky to have you as his big sister, fighting for him and standing by him every step of the way. Every day - multiple times throughout - you are all in my thoughts and prayers.

Tru Stories...Joel and his family are blessed to have you...one who is able to tell his story,and put a face and memories to a disease that otherwise could easily be dismissed as weird or many other first impressions. I feel for your family and pray for them also... Stephan Connor

They way Tru Stories is able to explain and understand what is happening and still keep her composure most of the time, is beyond me. She is one of the strongest people I know, and an especially great sister. I know the family is greatful for all of your prayers

If anyone else, was as surprised as me, to read Coach's kind words... he did still slip-in his trademark typo.
Even so...
Thank-you, husband.