Nope. Still NOT a Runner.

We've been a bit busy lately and it is showing on this blog. I'll try to recap the weekend.
Obviously, we love to kick off our Nation's Independence, with a quick little 5Mile jog. What better way to celebrate the advancement of America, than to wake-up at 5:12am, drive 50 miles south to then run an additional five miles.
The entire process became even more confusing (panic attack inducing) as we slowly received word, fellow runners began dropping like flies. One after another past runners, excused themselves. Until the event only left... Me, Coach, Doc and Clark.
Obviously. Why would you not, include me in a group with three life-long- competitive- dedicated to the burn- athletes such as those three. Makes perfect sense.

I felt a teeny bit more confident, as the temperature was at least 12 degrees cooler than last year. (Known as, the 4th of July spent on the surface of the Sun.) We had also learned the course had changed. The Mrs. (aka A Quitter) enthusiastically texted me how this was 'Great!' news for me. And I would 'own' the new route. Apparently, we 'mis-remembered' the town where I spent my first 22 years of life... is actually built on a small Mountain range. The participants unanimously agreed the new course was possibly more scenic but definitely more difficult.

Around Mile 2, I developed the most awful blister (must-of been because I was pounding the pavement like a maniac). If I had recognized even one spectator, I would have quit in a heartbeat.
Around Mile 3, I had an epiphany....
"I am not a Runner." Yes, I have known this fact for some time, yet it became painfully- smack up the side of my head- clear, at that moment. I am many things but I am NOT a runner. Sure... I may continue to enter a few events, in an effort to improve my Heart/Health/Bottom size... but I really, am NEVER gonna become a Runner. Nope, not in my cards.

I shaved 2 minutes off my official time from last year (3 minutes if you count the distance I began WAY behind the Start Line.) And yes, I AM counting that! 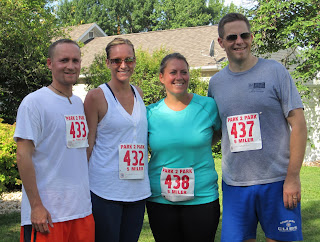 In shocking news... I high-fived the mascot, at the finish line. No... it was not the Runner's- High delusion, it was the "Thank Cripes, this is FINALLY over- High."
Another great Fourth, Clark and Doc. But seriously, next year, couldn't we just have a BBQ and maybe a little Frisbee???
Posted by Tru Stories at 9:59 AM