To my (Not so) loving husband: 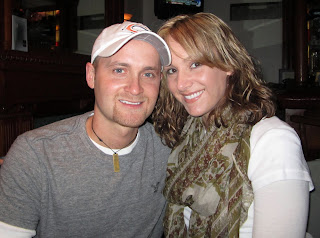 Do you remember last night, when I discovered the Classified ad in our Paper, for FREE Shih tzu/Cocker spaniel puppies? Adorably called, Cock-A-Tzus!
Do you remember how I said I really wanted puppies for our children? How I have lived with dogs my entire life and it feels unnatural to not have one in my home? How I believe that children are better people, after being raised with dogs?
(and you replied, How much better was Tink's face, for having a dog?? And I replied that was a FREAK thing and you should shut it!! And are you EVER gonna let that go?!! And you replied, No... a dog biting off my daughter's face, will never be a dropped subject.)
PS- You're Drama. Anyway....

So we finished our chat. And you said.. 'Ok, if you want a puppy, let's get a puppy.' And you went inside and called the guy's number.
Then, this morning, you called and told me that we had a 2:30pm appointment to go get a puppy! Excited!!
But somehow, while you were pretending to be kind and giving... you mysteriously played a CONR Jedi mind trick on me. (even though you don't like Star Wars. Which is ANOTHER THING I hate about you...)
You laid some kinda Twilight Zone alien negativity ear worm, while I slept last night. You pretended to be supportive but secretly must have chanted "It's not the right time for a puppy..." subliminally.
Because during my morning yoga class, I began to think this over. We have 3 summer day trips planned... I am training for a Pilates certification... the electric fence needs repairs... we need to get the children settled into the school year. Over and over, during my Downward Dogs, your stupid voice of reason, seeped into my excited smushy sweet puppy snugly brain.
After class, I spoke with you.
Do you remember how you said,
"This is your decision. Whatever you want. If you want a puppy, we'll get a puppy." You did mention, you were not leaning towards getting a puppy... but still you played supportive and sweet.
But dang-it, if I didn't realize until now, that your wicked smart mind reversed psychology-ed me. You really played me like a fiddle, didn't you??
Because do you remember, how I called you back an hour later and said.. "Alright, please call and cancel the appointment. This is not the right time for a puppy."
And do you remember how you replied,
"Are you SURE? Is this what you want? Maybe you are right, it is a busy time for us. It's YOUR call."
Don't think, I do not clearly see the game you just played. You skillfully, maneuvered that basketball past Your Wife the Defender, for your score. You drafted your played and dribbled so carefully around me, I didn't even realize who had the ball, you left me disoriented and confused. You're a crafty little Point.
Well done, Jerk. Well done.
Now...
I am puppy-less... AND I can't even really blame you, because you appeared to be supportive and kind, during the decision making process. Letting ME think, that I made the final decision not to get a puppy! You are the slimiest-sort of Super Great Guy.
You may have won the battle Coach...
but I will win this war.

Blog Public:
Consider this a public service announcement:
We will be in the market for a super cute, child friendly, small-ish puppy, sometime around late September. Free-sih and totally adorable. (I already have names picked). Unless of course, my husband CONR Jedi Mind tricks me into thinking I hate puppies by then. Coach may be cute and sorta little... but he just Ran my weak will all the way to PuppY-lessVille and back again.
Posted by Tru Stories at 1:17 PM

Dear Coach: I am suffering the loss of a grand puppy. I could already smell it's puppy head in my arms. I was planning to get one of the brothers. I know these were the best puppies we would ever have. Thanks for being such a downer. Now I just have 3 human grand children. Blah, blah. Coco bites, Tink barks, The Kid smells. But - none are real puppies. Coach you are not my favorite right now. I'm sad. Signed: Grammy Without a Puppy

Man...
we could have gotten all of the remaining three... and they would have been the best of puppies friends... and my kids would have sang the cute song from Fox and Hound... and it would have been the greatest, most magical union of puppy friends and three perfect children, of all times. With never a pee spot on the carpet or bite mark on an arm.
Just happy Joy.
And Coach stole it from us.

Obviously Coach Im on your side,puppies are cute for a very short time of their long life, while being cute, they piss everywhere, they chew up clothes, toys,etc....then they grow up! and your house smells like dog!

Dogs are cute, but they are cuter in someone elses yard, but not a neighbors yard...some can cause a bit of noise pollution at 2am!