Per our usual tradition, the men performed their annual slam dunk contest. Always a crowd pleaser. This year, we had our most contestants ever and were immediately impressed by the practice round. Warhol suggested a 'Telephone Game' style voting format, as to not hurt any feelings. The judges panel, seriously appreciated the new approach.
And before Munchkin asks:
Yes, of course the hoop is regulation.

Now....
I snapped approximately 68 pictures of this event. I carefully selected the clearest, most interesting photo for each participant. If the men do not like their action shot, my excuse is as follows....

A.) With your swift speed and insane power, while aggressively charging the hoop, it is difficult to capture your cheetah-like blur... 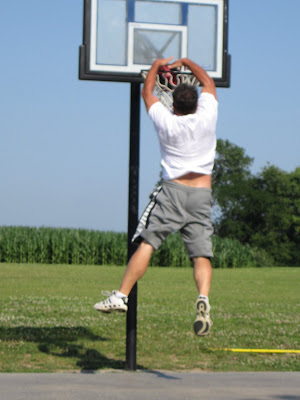 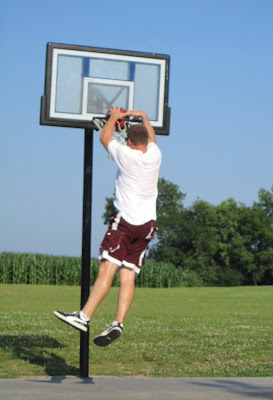 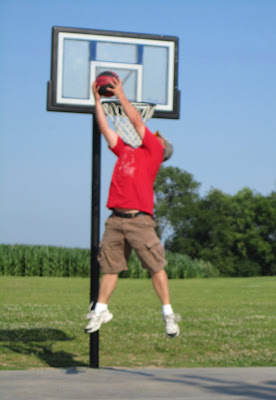 Sadly, the above three (Warhol, Clark and The Commissioner) were eliminated in the first round. 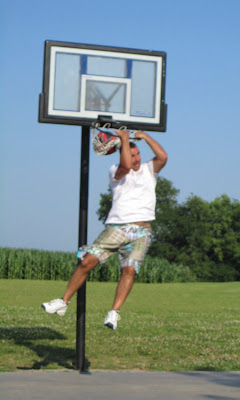 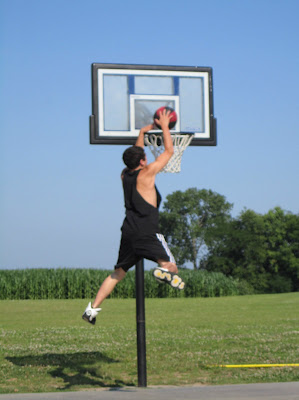 Chili and One were the next to fall.
(Literally. Which still worked in Chili's favor... as Flag Girl loves a good fall.)

Leaving Three and Coach to battle it out in the finals. Each was given 3 attempts to deliver their best dunk.
After a VERY intense round of telephone voting.... 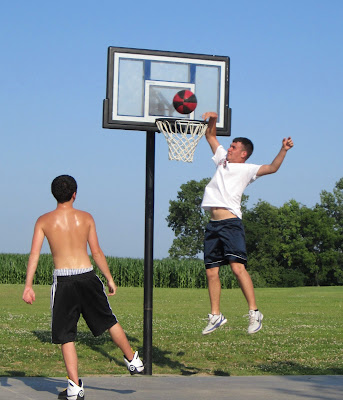 Our winner of the 2011 Slam Dunk contest and the man happy to regain his title (after a tough loss last year)... Coach. 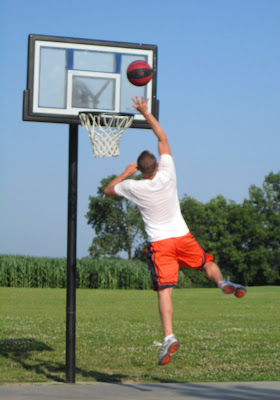 Now, you may wonder what's the point??! Why would anyone compete against Coach, in HIS sport?? Well... if there was ever the chance to beat this kid in basketball... it's gonna be in a dunk contest. And if the others start to feel annoyed about Coach winning, well they can always take Coach golfing. Rumour has it, that makes the rest look and feel like Super-stars.
Posted by Tru Stories at 4:27 PM

FACT, I am a terrible golfer. Out of the six of us in our outing, I was by far the worst. The Commisioner was outright the best, followed by Chili. I don't think we saw Clark's best, but still solid, and TigerWoohol was very impressive. Grandpa even had some stellar shots.

If we were just voting from the pictures, I would put Coach in last place. What are we missing? Were you too awed by his winning dunk to get a picture?

Hands down the best thing I watched this year.....

#1 would win just by his MJ photo! -robbedhol

I will say, that in the pictures, I do look like I should not have won. Everyone else looks like they are flying.

...obviously,
that was Coach typing the last Comment. Not Tru Stories.

I will admit, I did not photograph Coach's final dunk. I had to give the last round my full attention. If I was just voting on who I liked the bestest... Three would have taken my vote, hands down.