Preppin for the BEST day Eva!

Do you know what sounds like an AMAZING idea?? How about... a group of people, make a major decision, after an evening at The Pub II? A really ridiculous decision, like signing up for a Nationally publicized Warrior Dash.
Did I recently, get my pride handed to me, by my 9 year old during a 5k? Sure did. And yet...
I am totally, enthusiastically pumped!

Obviously, at first glance, this photo resembles me. I can NOT get enough of racing around in mud under barbed wire. OF COURSE, I seriously Heart running. That much is Tru. I've written often and lengthy posts, about the extreme runners high I experience thrice weekly. 4 times, if I am lucky.

And my zest for competition? Can't get enough. I can't tell you, how many times, I dare Coach to race me to the end of the block, for kicks. Just yesterday, we timed to see who could climb 3 trees the fastest. Obviously, I won by several minutes.

AND let's talk about the crowd of 13,000 people. Totally Good Times! What could be more fun, than running 3.28 miles??? Running those long hill-packed miles with five hundred and fifty (per heat) of your closest friends. Being elbowed, trampled and ridiculed by a pack of over-zealous jocks, jacked on adrenaline and wearing Medevil costumes?? Bring it. Never had a nightmare about that! No sir.

THEN> for $hits and giggles, let's add several severe Thunderstorms into the forecast! Because the only thing more exciting than climbing over a 30 ft wall, would be if it were wet, slippery and combined with the threat of electrocution via lightening bolts! Awesome. 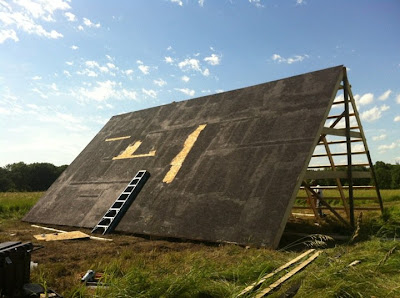 Viewing the Warrior pictures, on Facebook, totally did not make my hands shake and my belly flip. I mean.... it flipped hard-core over the excitement of Tearing that Warrior course a new one! I have randomly and repeatedly burst-out this morning, in a pumped growl of victory! Especially, when I discovered the outstanding news, that they have ADDED and Changed several of the obstacles. Great! I was secretly hoping, they would make the event more difficult and LONGER.

A wooden arch, with open slates, to climb over and then down? Tremendous! I definitely have NOT had a life-long secret irrational fear of failing down or into wooden bleachers. Following the previous two thousand people, who have left the obstacles muddy, makes the challenge EVEN MORE heart-pumpingly awesome. Crushing my shin bones... sounds like the perfect Saturday afternoon.

Now, if we could only climb over rusty broken-down cars (fingers crossed my night will end with a totally wild late visit to the ER for a tetanus shot) and then.... jumping OVER fire. Man, I do love jumping. AND... I really love fire. Super cool stuff.

After I have shattered Coach's time, by a minimum 30 minutes... I will wait for him, by first being hosed off by a group of men and THEN eating my complimentary Turkey leg and cup of beer. Because if there is nothing I love more than jumping fire... it's gnawing meat off a bone. While washing it down with a warm, outside beer. Not to mention, I am totally the kind of girl who digs being hosed off by strangers, with cold river water. Can you imagine the affectionately bright smile, I will save for those (F##$*rs) guys?!
Could this day GET ANY BETTER??!!

Who's psyched????
This girl!
Tomorrow CAN NOT come fast enough!
Fingers crossed it is 87 degrees and Humid.
Posted by Tru Stories at 10:00 AM

I have never seen Tru Stories so pumped about anything in my life.

Tru Stories you are one of the most mentally toughest people I know. You are way more fit that you like to portray. As long as they do not add climbing through a pit of spiders, I know you will kick the Warrior's Dashes behind. No you will not do it with a smile. I wish I could be there to see you finish. Unfortunately, it is suppose to rain and be in the high 80's tomorrow. My hair will frizz. Plus my grandkids are visiting. We'll be busy with Wii fit.
Have fun! I'm already proud of you for signing up.

Anonymous: I hate you.


Mom: Uhhh, now you have guilted me with the worse guilt of all 'The-Mom-I-Love-You-And-Are-Proud-Of-You-Guilt'. That made my stomach hurt more.

Let's pretend like you were maybe using some sarcasm in today's post. As a result, the following conversation took place at OCH:

Me: Tru Stories is freaking out about the Warrior Dash.

The General: Yeah, I'm not super excited about it either.

Me: She wants someone to run it with her. I told her you would do it.

The General: Is she going to go slow?

The General: Then there's my partner.

Me: She's also really afraid that she's going to get to the top of one of the obstacles, panic, and not be able to move.

The General: I'll just push her.

So there you go. You've found your running buddy who is clearly nothing but encouraging and supportive. I think I want to go with you guys just to experience the aurora of joy that will be surrounding you.

I may be running around the wooden arch and a few others. Anything over shoulder height!

I love the General!....in a way a straight man can love his straight cousin.....completelyhederoholg

Anyone in for next year?

General:
I will be running/slow jogging/walking SOOO slow, it will be like I am literally defining the word 'slow' as I attempt to run.
Also, it's not so much that I will require a push over the Arch, it will be more like a mental pep-talk.

Chili-
In a long line of stupid things you have said, That 'Mudder thing' is by far... the stupid-est.