Warrior Dash: Eye of the Tiger.

After an extremely hectic morning, which included a freak vomiting session from Coco, I was exhausted before setting out for our Warrior Adventure. Due to our inexperience and poor registering, we did not follow the suggested Car-pooling rule. Which did not help my increasing Neeerrrrvousss-ness. I rarely feel nervous, but my repeated views of the ever changing Obstacle Map, became a serious issue on Friday.... (Maybe you noticed, from the previous blog post.) and they peaked Saturday at 1:50pm, when we witnessed a stretcher leading a participant off the course and into an ambulance. At which point I declared,
"I can't do this... I am in over my head."
Locating our group, did nothing to calm me.
Even the young spectators were focused and intense!! 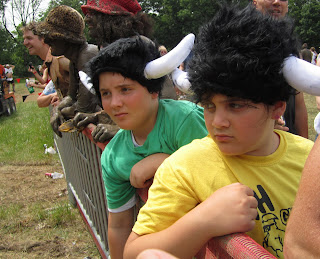 Clark and Doc were the first to race. I cheered on their finish but began shaking as I noticed Doc (aka The Sports Chick) looking beat, while digging thru the mud.
Me (voice cracking): How was it???
Doc: It was fun... but REALLY hard.
Me (nearly fainting): Ohhh, I shouldn't be here.

I tried flashing my new sweet Tat (courtesy of Warhol and a Sharpie) to appear confident.
But I was fooling no one. Especially, not myself.

Flag Girl, Chili and Three looked tough. Sorta like a rainbow of head scrunchies and colorful awesomeness inspiring T-shirts. They were focused and ready. 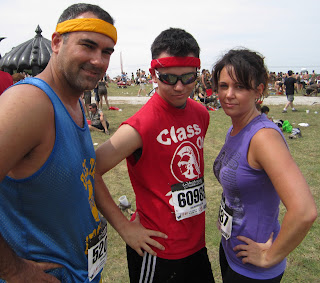 Photographic Proof of the Final Three Obstacles.
In Obstacle order... NOT in Competitors Order.
(not to offend those who were quicker than others....)

1. The Commish. Crossing over the last of MANY cargo net/rope Climbing Obstacles. 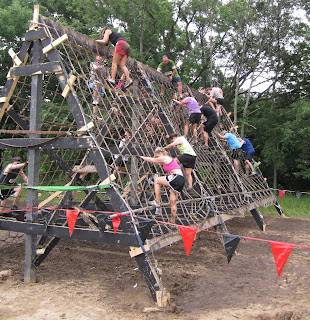 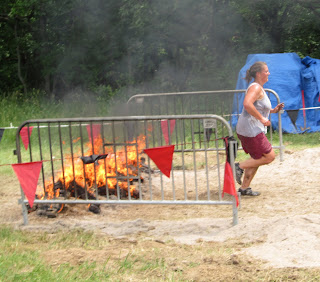 3. Doc, then Me, Ditta and Flag Girl. Crawling in the Mud pit, under Barbed Wire. Coach liked to refer to this portion, as the Giant Mud Milkshake. 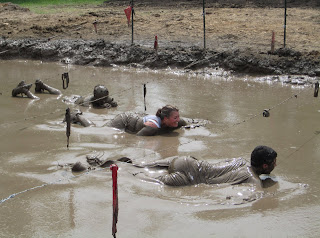 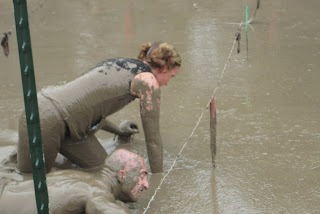 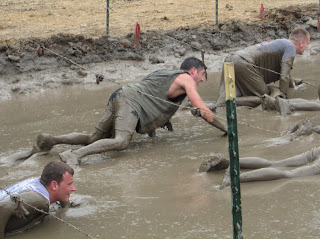 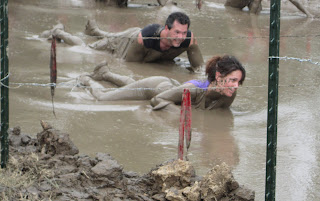 Immediately upon finishing, we all had a moment of disgust, confusion, maybe a little anger towards The Mrs... but then slowly... we all started to smile.
Almost like, we kinda enjoyed ourselves... Weird. 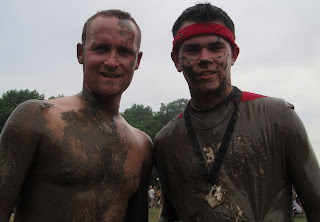 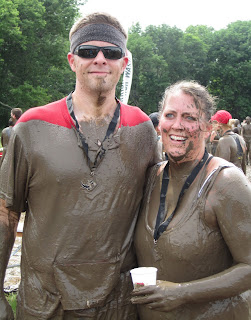 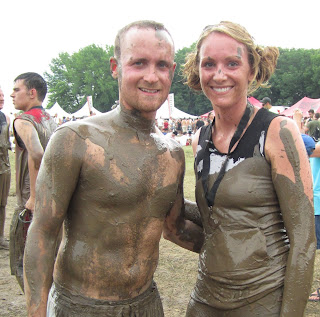 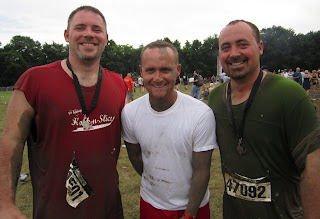 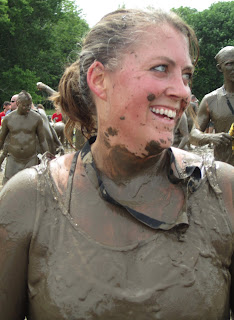 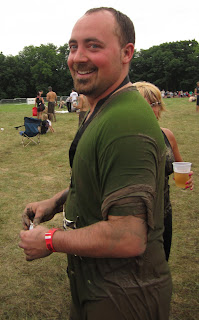 The only person NOT smiling in my direction??
This man. 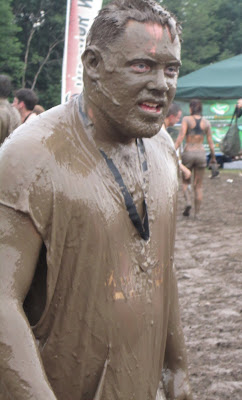 We decided Friday afternoon, The General would be my Running (Jogging) Buddy. I was nervous and he was ummm 'unprepared'?? We swore to stick together. Partners. Teammates. We started slow, shared some solid moments. Laughs at others expense. We held hands over the creeks. We celebrated small victories, declaring each person we passed to be a 'huge loser that we had just shown a lesson too'. Times were good. But somewhere around the water break/Hill from Hell, we drifted apart. I don't know, it just wasn't there anymore....
We got to the Game Changing Obstacle:
The Giant Rope Wall Up turned 2x4 Ladder Down.
This was the obstacle I had most feared. I have notoriously weak arms and fears of grade school PE rope climb, still haunt me. Except, I scaled that Obstacle like a champ, climbed over and down. And then the winds, of every Greek Athletic God, flew at my back. I 'Just kept Running....' (jogging).
Ummm, except, I was running away from my partner.
I met his gaze. I shouted "I just can't stop!!"
He did not cheer me on. He growled and sorta glared.
I left my man. My partner.
I should feel remorse. Regret. Maybe even ashamed.
I just want to ask The General this:

In Conclusion.
I CAN NOT believe I just did that.
And yes, I would do it again.
(If we all register for the early-bird rate and carpool. Because that was not, an inexpensive accomplishment, by any means.)
Congratulations to all our Warriors!!
Love you guys and our stupid ideas!
Posted by Tru Stories at 10:40 AM

Amazing pictures! What an adventure. It is great the way all of you keep pushing each other out of your comfort zones. Or it is very scarey how you all follow each other into these competitions. Tru Stories likes to cliff jump into rivers.
Question: If all your friends jumped over a fire would you?
Answer: Yes
What next? It all makes good blog material.

I can't believe I didn't realize it earlier, Tru Stories, but I think you might have experienced not the winds of Greek Gods at your back but rather your very first runner's high out there on the battlefield.

I'm incredibly proud of you even if you did ditch my husband leaving him to fend for himself.

It was not a Runner's High.
It was a Rope Climbing/Fending off Nightmares of Grade School PE/High. And it was Awesome.

I would sign up today for next years if I could! Loved it and hated it all at the same time!
I still FEEL like a friggin WARRIOR!

As a spectator, it was awesome. Did not realize it would be such a workout to follow ten of the crazy Connor/Patten clan. Enjoyed the afternoon and thank all for their awesome performance regardless of their time. Love you all. Job well done Warriors!

Warriors:
There is one Oct. 15th in Missouri. Do you think Tink wants to spend her birthday weekend, with a giant group of idiot adults, road tripping to MO??

So does that mean you will be with me for a longer percentage of the race or ditch me .12 miles sooner?

AWESOME! I'm so proud of you! {and am off to see if anything similar takes place in these parts-- I want to be a warrior!}