Why isn't Your Tail-light Taped??

It was mentioned late Saturday evening, that it was maybe time to find a higher class of friends. Not a moment too soon, we got the offer for Front Row Dugout tickets to Tuesday's Cubs game... and just like that, we were livin the high-life.
We began our day with a quaint little breakfast for four and hopped in the car (sans snakes) for Chicago. What felt like hours later (I Heart IL road Construction) we were escorted to our fancy-smancy seats.
(picture the moment in Wayne's World, where they repeatedly flash their back-stage passes. If possible, Coach and I probably behaved even dorkier, as we held our 'Row 1' tix out in front of us.) 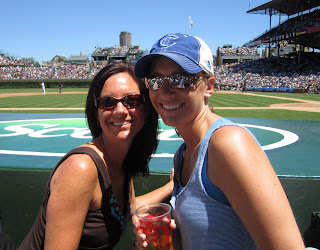 The weather was perfect... the day was beautiful... the Ivy was bright green... the Cubbies won...
(uhhh, just seeing if you were paying attention....) 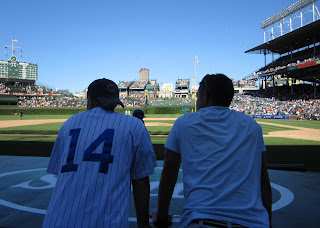 While in N'Orleans, I had befriended several celebrities (Holla Back Jonah Hill and Alexis Whatshername...) Obviously, word has gotten around Hollywood of my charms, because... we were sitting just a few seats away from an almost unrecognizable John Cusack, as he celebrated his birthday.
John and I shared a moment, as I shouted his name and he double-gun-shake-finger pointed me. He was just about to give me his number (to get a piece of the funny texts me and Jonah share) when The Tool next to me shouted, "Con-Air Sucks". I was seriously annoyed, because anyone with TNT or TBS is aware, that is a totally false statement. 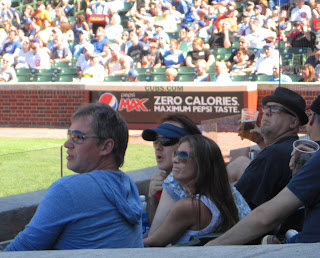 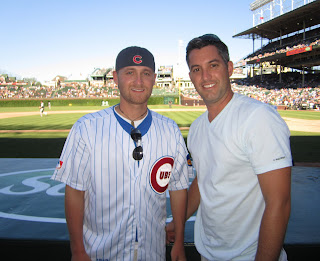 The game ended, with the customary 'Big W'
(still paying attention...?) and we headed to The Stretch for a bite. Ditta got a taste of 'Childless Couples in Chicago' and did not want his evening to end. We strolled a bit, browsed various stores, Ditta (infamously a White Sox fan) purchased a Cubs shirt for His Wife. Gasp!!!
(And you thought you were 'Over Me' General?!) 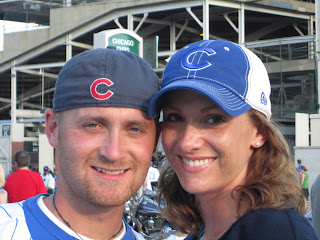 As we strolled back, after our long Fancy Day, we snapped one last picture in front of the Holy Grounds. But Wait!!.... Ditta was Still.Not.Done!!
"Let's go over to the beach and grab a drink and watch the sunset..." That's the kind of statement Lincoln-driving folk say. No stops at the gas station for groceries. No driving in vehicles with flames and/or scissors on the back. Higher class couples close their day, strolling along the damp sand.
(Ditta was unable to convert Coach, who remained on the sidewalk, toe-sies safely tucked in his Twos.) 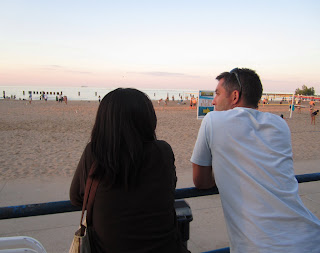 Thanks for a great day, Dittas.
But it was sorta weird without the obligatory evening-ending chat with County....
Posted by Tru Stories at 8:53 PM

i immediatly am taking offense to the 1st sentence in this blog!!! who is to say our cubs trip will not be classy? oh that's right....you are going with "country folk"!!! ;)

your country friend from k-bry.

Disclaimer:
To all of our dear friends. Obviously (per usual) my post is laced with sarcasm (for dramatic purposes)... though sadly for us, the tail light mention is Fact. Our Fact. Therefore, we are painfully aware, WE are in fact, the least classiest people we know.

i don't know, we may have you beat!!! haha. seriously, we should think about this "unclassy" float trip for next year!!! you guys would fit in with our "unclassy" friends great! ;)