Going to The Carnival: Check.

As the other cousins, ran off to more amazing rides. Poor Tink, suffered through one 'baby ride' after another, with her 'baby sista'. Behaving as the Lead Driver pacified Tink at first but after the third ride.... 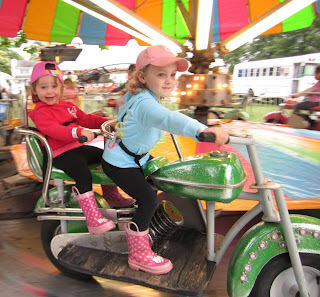 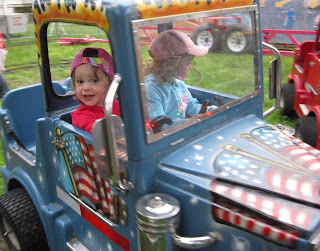 ... Tink was bored and slightly annoyed. 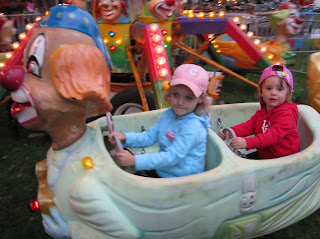 Gradually, as the night wore on, most (not all) of the Carnie's became more lax with those 3 crucial inches, and let Tink on more exciting rides... as long as she was accompanied by her 'older sister'. (aka any older girl cousin, she stood next too.) Tink was much more happy... Coco, not so much. 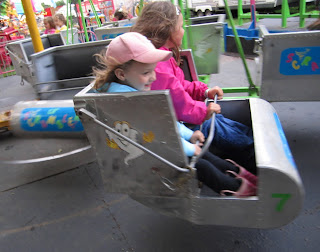 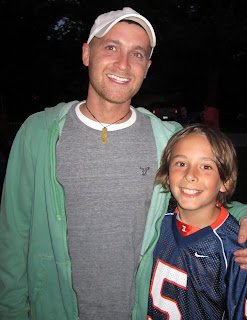 Coach and Six, immediately following the Scariest Ride 'The Ring of Fire'. Coach's cheeks are still cramped from hysterically laughing at Six's extreme fear and near crying. Coach is a very loving Uncle. 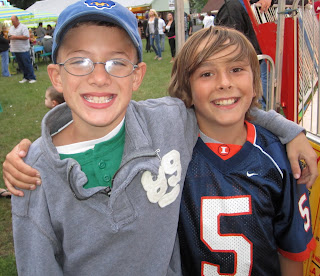 The Kid and Six. Best Buds. 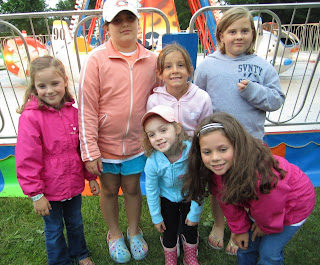 A Whole Bunch of Girl Cousins. 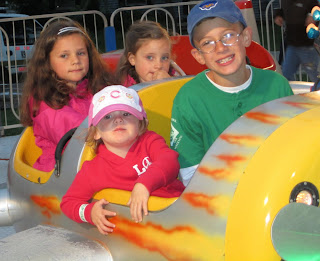 The Airplane Ride. This particular attraction was frequented by our group, no less than 27 times. Sweetbreads and I agreed, if the Official Carnival Engineers had placed a bench nearby, those kids could have hung there 'til the planes actually took off. 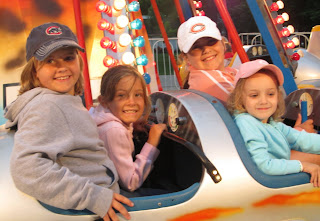 Best Moments of the Night:

Number One:
Little Blondie (Cousin Number Eight) took Coco up to the GIANT slide. I whisper to Sweetbreads "I hope Eight doesn't accidentally let go of Coco, while she situates herself on the towel...." Moments later, I witness Eight place Coco on her towel and THEN two handed SHOVE my Baby in the back, sending her catapulting at top speed down the slide, ALONE on her back...then on her side...then sorta backwards... while I was left unable to breathe for the longest 7 seconds of my life. Thankfully, Coco did not break her neck and loved it. My kids crave the Danger.

Number Two:
A Text Conversation between Mrs. and I, after we had gotten separated....

Me: We are leaving. Finally.

Mrs: Seriously. We are shutting this Mother down. My kids are high on life, right now.

I never heard back from Mrs.
For all I know, those ladies witnessed a beautiful scenic sun rise from atop The Ferris Wheel, this morning.
Posted by Tru Stories at 9:34 AM

The Coco part made me laugh so hard.

me too, i could totally picture it & i did have my hand over my mouth starting at 'and then two handed...'
good stuff.

I, also, feel slightly bad for how hard I laughed at the Coco part. I'm actually still laughing a little bit.

I can NOT believe I missed Coco's near death experience on the slide. That story was even funnier than Eight saying, "Are we higher yet?" on those stupid airplanes. I still laugh when I think about her saying that. She's a good time at the carnival!

I didn't know that I was going to shove her down that HARD! Those airplanes were hard to do because I didn't get how to work that stupid blue thing!!!!!!!!!! #8

Thanks for taking us to the carnival we had a really fun time! #5 & #8