Typically, you may not expect a group of siblings and their spouses, to vacation in what is easily the Rowdiest place in America. But as previously mentioned, this family is also friends.
(maybe by choice or maybe because no other people find us as hilarious, as we find ourselves.)
Disclaimer: The middle brother, knocked up his wife again... and they decided maybe, being very pregnant on Bourbon Street, did not sound like fun.

The Eldest (Self-declared First in line for the Throne)
Warhol and his girl Sweetbreads Bailey.
(He just keeps spiking her Kool-aide and she just keeps falling for him harder.) 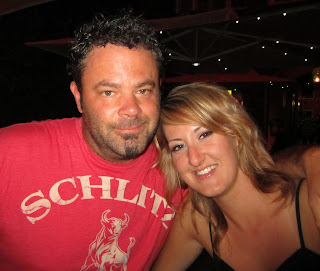 (Above Pic taken pretty late into the evening!) 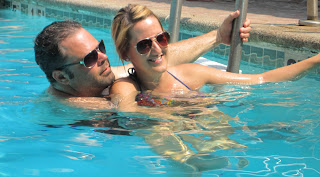 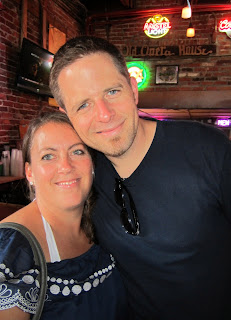 Clark squeezes his wife up tight.
Cuz he still likes her as much as he loves her. 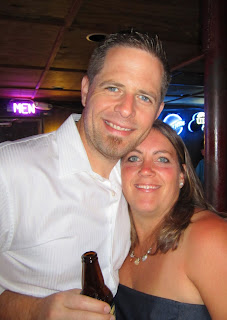 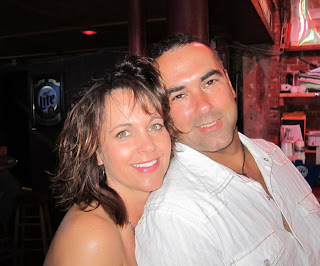 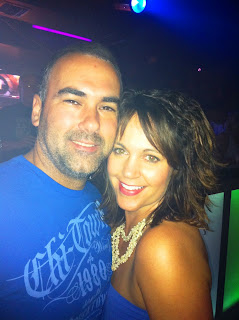 (Not only is this couple cute as a button in matching Blue, they also seek out blue spotlights to enhance their magazine-like photographs.) 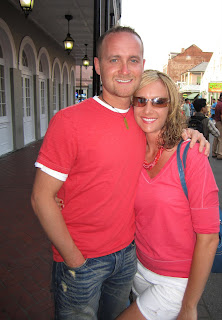 (Night 3, we drew the short straws and matched.) 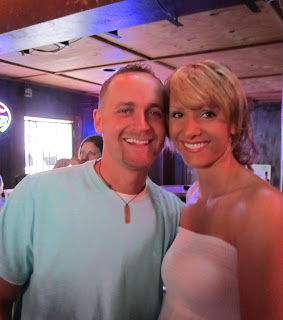 Walking down the street, a random man shouts out:
"Hey....! Somebody marry that girl in the white dress, carrying the 24 oz!!!"

I'm about to smile from the surprise compliment,
but then Warhol shouts, while pointing at Coach:
"He already did... and it's not that great!"

The response: the electric hum of Bourbon Street and the thud of my battered ego, hitting the cobblestone. 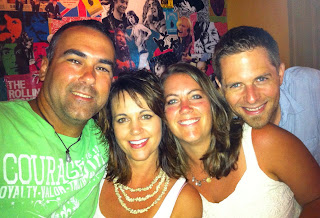 (The Sisters and their Men) 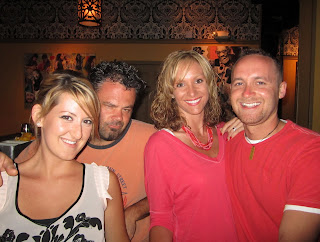 (The Brothers and their girls)

Because I like to keep it real,
I will finish each New Orleans post, with a 'Negative Turned Positive' vacation moment.

The Flight:
Historically, Warhol has avoided flying, like the plague. Seriously. Terrified. We discussed this fear (repeatedly, until my ears were bored to sleep) over the past two months. But for the Tru Luv of his girl, Warhol (plus a Valium) hopped a plane south, with VERY little drama. Declaring: "I would definitely, do this again!"

Sweet Flag girl, also a non-lover of planes, MAY have mentioned, she would NEVER fly again. 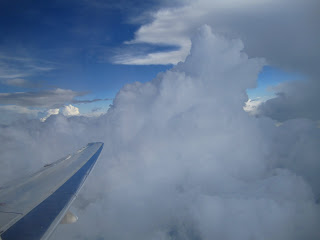 Except...
Chili is already planning our next trip.

I must admit,Tru storys, with her flowing white dress, golden curly lox, and tall stature, framed by the enchanting New Orleans historic facades sporting a 24oz can of Miller Lite was breath taking! - whodathol

Can we take our drinks in here?

2 Xanax and smoothest flight ever still equals major in air meltdown. FREAK!!!!!! And yes you can bring your beer in and you can also leave with it.

This is how the beautiful people live. Jump in jets for week-ends in New Orleans. Living the good life. Good for all of you!

It's already a little ridiculous how good looking all of you are, but I think your beauty is magnified in NOLA.

Did you just make up NOLA?

She was beautiful, I did marry her, and she really knows how to handle a 24oz.