Kick Off to Training...

As previously mentioned, I have been 'committed' (appropriate word choice) to possibly three (probably two) races in the next 10 weeks.

Insert: I reserve the right, to withdraw at any given moment, due to poor weather conditions, injury, anxiety attack and/or complete lack of interest.

In typical fashion, I have done Zero, in preparation.

Training (pretend practicing) began 3 weeks ago, shoe shopping. I tried 3 pairs labeled (Running.... or Quick Walking/Slow Jogging) After a brief rant over "What the bleep has happened to me??", I chose the Most Comfortable Shoes, rather than the typically familiar choice of Cutest Shoes worn with my Yoga Pants.

Mentally and physically exhausted from my grueling shoe decision making process, I forced myself to rest for nearly 2 full weeks. It is wise to pace yourself, while Marathon (5k) training.

Kick-off Weekend: In a carefree (ignorantly innocent) moment, Tink and I dared The Kid, we could race him and Coach (driving in the van) from Grammy's house, to our house... on foot. It will shock you to know, little Tink (who typically declares leg cramps walking down the hall to the bathroom) is actually lightening fast and apparently Daddy-like competitive. Her tiny legs took off in a blur. 3 blocks later, I tried to coax her into quiting (yes, you read 'quit').
"Tink, do your legs hurt? Do you want to walk? Do you want to stop and look at some flowers??!!"
"NOOOOObe. I want to win!"

Her father cheerfully encouraged us (cracked the whip like a slave driver cuz he must think I am fat) by driving slowly behind us. While I PRAYED (that's right GG, I waste prayers on NOT running) Coach would just 'Pass us and put me out of my misery.'

Our compromise?? He stopped, we threw Tink into the van and I promised to walk the remainder, so Tink could beat me. Because she "Had to win somebody!!"

That little dare, jumped-started my running AND my training for preparation in becoming the inevitable race loser for the people, I know and love.

Wednesday: Jogged. Walked. Jogged again, on the walk from yoga. I even went 4 blocks Out Of My Way! (did you hear that garbage, Doc?? 4 Extra Blocks.)

Thursday: Yoga, followed by a lite DQ lunch (turkey sandwich no mayo and MINI-blizzard... my body is cleansing). Short walk in the afternoon, with plans for another evening walk except... I was compelled to watch episodes of Glee Season 1 on Wii Netflex.

This morning: I woke early. 6:00am and ran 4 miles.
Without stopping.
Coach snapped this picture, as I passed the house. 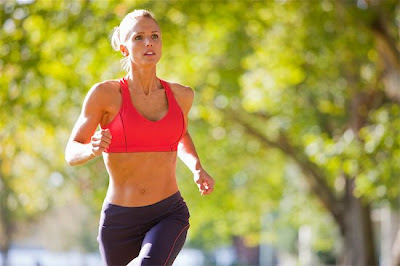 Ok. That last entry was a lie.
But still... it's sorta a start.
Include: many breathless moments, hyperventilating over the ridiculous and mind-bending Dumb-ness, which led to my registering for the Warrior Race... and I have 'committed' a solid 4 hours, in 2 months.
I'm Hard Core.

I am still contemplating on my work out regimen.

That is EXACTLY what I look like when I am running!!!

Nice work on the extra blocks....so very proud of you!!!

You're making me feel lazy.

Agree Munchkin, the 6:00 am totally gave it away as a big fib.

even the girl in your picture looks slightly confused.