Sometimes, I am way too busy to Download Pictures...

On Sunday, our little Nine received her
First Communion. She was beautiful. 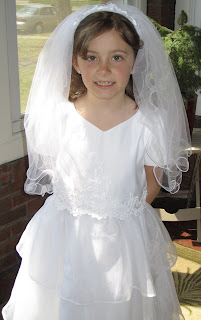 As was her Aunt Doc. Coach was sorta cute, as well. Obviously, her god-parents were chosen for attractiveness AND athletic ability. 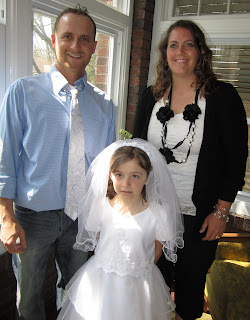 Unfortunately, for Nine's Blog time, her brother Six, stole her thunder for me. During Mass, sometime around the 'Is this over yet' portion... I lifted Coco over the pew, to Aunt Flag Girl. While doing this, Coco's dress lifted, exposing her diaper. The entire Nieces and Nephews row, giggled over this.

Except, Six, who whispered to me: Ohhhh.... So girls do wear underwear, under their dresses?

Me (laughing): Of course they do. What did you think?

Six: I don't know (standard Six shoulder shrug)...
I guess, I thought they wore nothing.

Me: Six... if that were true, there would be 100 little girls in this church right now, sitting on naked butts.

Six (and the others) erupted:
Yeah... I guess you're right.

Second,
I am still the most "Inappropriate Aunt" AND the newly crowned "Most Hilarious Aunt During Church".
I'm sure my mother-in-law, is very proud.

Congratulations, Nine and EL.
You both were lovely.
Posted by Tru Stories at 8:30 AM

how did i miss this, i was sitting next to you

Could it have been when you went up front to partake in the wine? I don't think Tru Stories is invited to that.

My Mother reads this blog....so I shall refrain from the plethora of brilliant comments I have....Classyhol

Dear OppositeofClassy-Hol:
Go ahead and try us....