Many may assume, Basketball is Coach's most favorite season. And while the answer would be ... Yes, he really hearts the bejesus out of Basketball:
the taste of the ball, the glare of the bright gym lights. His most Favorite SEASON? Hands down, Football.
Many forget, Coach was not a bad lil running back.
(All Conference. Twice. Thank-you.)
The very moment, the Summer air turns a bit crisper. Our home's location, becomes his most beloved selling point. Football Friday, baby... nothing better.

Two weeks ago, after he had picked up Three from practice, Coach returned home all juiced up on his nephew's excitement.
Coach commented (Deep Thought Alert!): I just do not understand why EVERYONE would not want to play football?! It is the only sport, like this. You are only guaranteed 4 years of football. You can play basketball on leagues until your knees go... you can play softball until you're forty (I quietly responded with a huge eye roll and pointed stare)... you can golf, until you are dead! But you only get 4 years of real football. Man, even when Three got in my truck... I missed the awful smell of the dirty football pads! 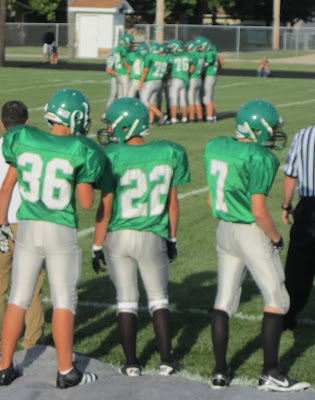 We like to turn every Friday evening into a party. We all meet at the house. Coach tries on old jerseys (kidding, sorta). We walk together to the stadium. (Nice and too early so Flag Girl doesn't miss a second of Three's cute warm-ups!) I order my pop corn, Diet and Peanut M & M's. It's an event.
Friday evening. Two games (JV and Varsity).
Nothing better.
This past Friday. With his large and in-charge smiley family section standing and wildly clapping... we were honored (I almost cried) to watch our 15 year old Three, start in his First Varsity Football Game.
We would not have missed it, for anything. 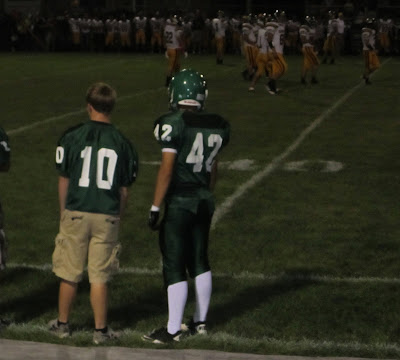 (A notmuchlongerinjured Two and Varsity Three)

Seriously... how cute is that pic? I'm like a crazed (super annoying) nature photographer, trying to capture the perfect snap of our boys.
We eagerly await the medical release of the Senior Two, to join his cousin. Coach cannot get enough of his kinfolk on that field.

This Friday's game is Away. I had sorta considered missing a few Away games. Except, Three excitedly (nearly everything he says is excitedly!) swore to me that I just HAD to go... because he had a great game against them last year.
And Darn-it if I am not still easy persuaded,
by a cute football player!
FYI- Unanimous vote, Three is a teeny bit cuter wearing the black socks, than the white.
Posted by Tru Stories at 9:20 PM

We all have found out to everyone's surprise.....3 is def a "Bad Ass" It's the Irish in him! Chaingang?hol

I like #42. It was my hubby's basketball #. How weird is it that Tru Stories married #24 and I married #42. That is deep.
Wish we could attend the game but we will be away on our crazy no kids week-end.

Can't wait to get in on the Friday nite Partys again!! Our season should wrap up mid Sept. Get ready to make room!

Flag Girl - JV /Varsity combo looks like it leads to more laundry, lots of snacks and bleacher butt!! I'm sure it's TOTALLY worth it!!

That boy loves him some fans....He knows your weak when it comes to football TS!

Does it surprise anyone that The General gave me that EXACT speech not more than a week ago? Why any physically capable young man would choose to play any sport over football baffles him. We had fun watching Three last year on our turf - maybe we'll try to make another one.

The girls were so excited for the Bears preseason game last night that they were still talking about it this morning. And so it begins...

When did Dwight switch its color from Kelly green to Coal City Green? And it took us years to get rid of red as the accent color, why add black?