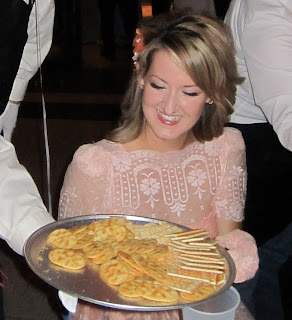 I've never seen you looking so gorgeous,
as you did that night
(Nothing new. You are dressed painfully cuter than I, most nights we are out.)

I've never seen you shine so bright,
you were amazing,
(It may also have been the shine coming off the fake satin material of your dress.)

And when you turned to me and smiled,
it took my breath away,
(I was actually more breathless from the Big Dance. But it's nice when you smile, too.)

And I have never had such a feeling,
Such a feeling of complete and utter love,
as I did that night....
(Ummmm... if I am being totally real... I sorta got more of an 'annoyed feeling' rather than 'utter love' because your creepy old boyfriend, would NOT stop going ON AND ON about how barfy pretty you were. Totally making me feel like a GIANT NOTHING but I guess that's still great news for you. Puke.)

Happy Birthday, Sweetbreads.
I wish you many more!
(Really, I wish you MANY more... and a few less for me and maybe several less for Warhol.)

Thanks for joining the show.
You are One seriously Cool Chick.
Posted by Tru Stories at 10:26 AM

Email ThisBlogThis!Share to TwitterShare to FacebookShare to Pinterest
Labels: You say it's your birthday...

Happy Birthday Sweetbreads. Just found out today. Have a great evening. Gramma G and Grampa A

Happy birthday Sweetbreads!! Have a great day! Love the picture.