Per The Mrs's suggestion, we entered a charitable Fun (not) Run, this morning. It began with a 1 Mile Run for children, followed by a 5K for children and adults.
Tink was psyched ALL WEEK, about entering her first Big Race. She ran the 1 Mile with her girlfriends. She did not fair as well as she had hoped (apparently there were some bottle necking issues and little Tinkerbells, sometimes get pushed around.) The Kid and I entered the 5K together. As a FUN bonding experience.
Turns out, not so much.
We woke this morning, to dark skies, heavy rain clouds and temps hovering around 47 1/2 degrees. Not exactly my ideal running conditions.
(Honestly, I do not have an 'ideal running condition') 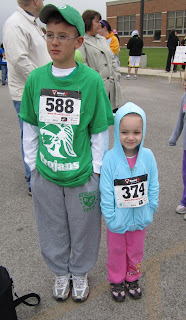 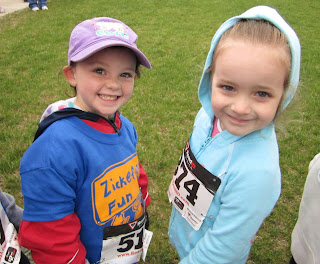 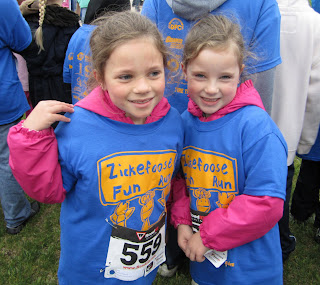 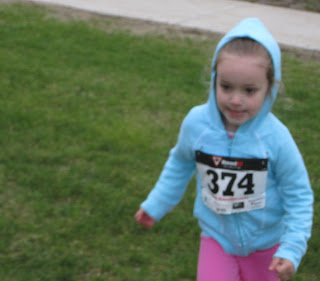 (Tink's Daddy-like determination, captured on the last leg of her big race.) 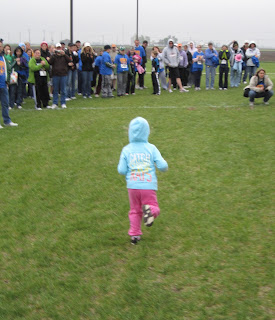 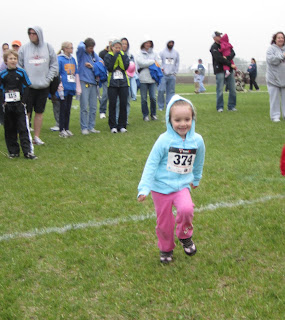 (She was convinced she had 'won'.) 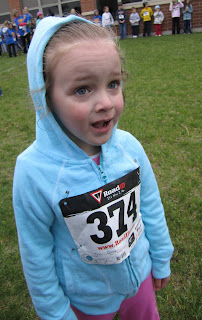 (It took a minute, to catch her breath. Still with more dignity than her mother post-race.) 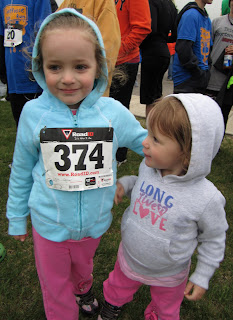 During a much-too long break between races, the rain and cold began to hinder, my already Not-lovin races kind-of mood. Not too mention, The Kid was nervously/enthusiastically chatting, faster than Coach runs. After the two mile mark, I fervently urged The Kid to run ahead of me. Actual words: "Run faster and don't look back at me... finish strong."
Now... most adults would feel embarrassed to admit, they could not run with their 9 yr old son. Not me. That boy is fast and maybe I have mentioned: I HATE RUNNING!! Therefore, my pride is still perfectly in tact. 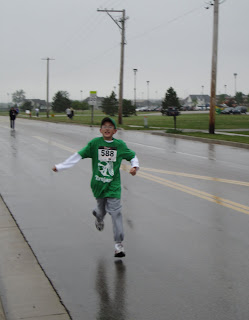 This was the only picture of The Kid.
Excuse:
I left the camera with Grammy, while we were running.

Reality:
I couldn't have snapped a picture anyway, from 4 distant blocks behind him. 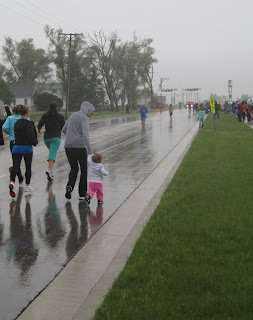 On the last block, I grabbed Coco, to let her Finish a race. (again, totally not ashamed I Hard-core finished with an almost 2 yr old.) I really don't give a bleep. 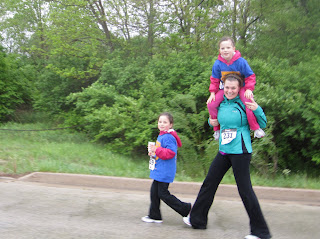 (The Mrs and her girls nearing the Finish. They look much more cheerful, than the negativity spewing from their mother's mouth.)

So that's THAT.
My official Kick-Off, to my Summer Race Training.
Obviously, not a very impressive start, given a 3rd grader left me in his dust. I guess, it's sorta sad... my children can not respect me.
Posted by Tru Stories at 7:17 PM

Tru Stories you keep saying you are not a runner and do not like it, but you enter. Today you ran a race in the cold and rain. I am very proud of you!
Super proud of The Kid and Tink. I did not even want to be outside to take a picture. It was cold & wet. Very cold! Very wet!

I stayed at your side because I love you and because I did not want to get lost. I want to do it again, hope you can run faster next time.
Love You!

Congrats to all of you!! Very proud of everyone's strong finishes!!

That looks awful. I feel bad for you.

Can we talk about Flower? She is so super cute! i love how her smile crinkles her nose.