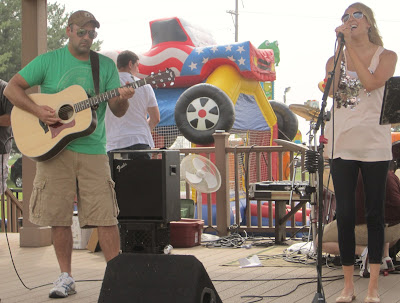 Chili D and The Teacher will perform
at The Mansion Patio from 7:00-9:00pm.
With promises of new songs and (I would assume) a new little back-up dancer named Coco.
At least twice today, random blurbs of rock concerts flashed on the television and BOTH Coco and Tink excitedly exclaimed THEY were attending a rock concert on Thursday! (They're planning outfits.)
Obviously... The Patio is the place to be.

Side Note-
Technically, I am not officially their publicist, per say.. I have not actually yet been hired.  Nor have they ever mentioned the position in any capacity.  I have never received any type of monetary compensation... it's possible they may actually be annoyed by me... maybe, after Thursday my daughters and I will be on their Do Not Allow Stalker List... but if you want to call me their publicist... go ahead, I don't mind.

As their publicist, how many free tickets will you be able to get us to the concert?

I'll check with their manager.

New songs......can you hear my nervous laugh? I'm not sure I can remember our old songs. That's what happens when the real star of the show goes on vacation for 3 months! Atleast It seemed that long. There's a 5 letter word that usually is used when a rockstar goes away!!!! Starts with an R.

Fall sports practice is in full swing at One Carbon Hill. Bummed we're going to miss it!

Am I the only one who doesn't know what that word is?