Well... sorta.  I mean I can't sing, or play an instrument.. I'm not their manager, I guess this post sorta makes me like their publicist...
Chili D and The Teacher have formed a band.  And it's not like other small town people, with nothin better to do, who look at each other one night over a few drinks and say "Hey... I think I can sing" and then "Hey... I think I can play a guitar".
These two actually CAN sing and play guitar!
Last week, the band played two sets at The Boondocks and they were amazing!  Random strange people in the crowd were recording them on their phones (I'm not iPhone savvy but I'm unsure what one does with video of strangers singing on your phone... unless they were secret Nashville Record label spies.) 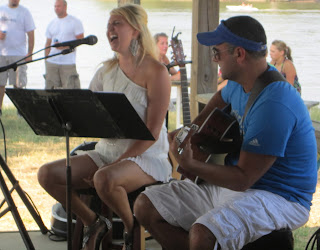 They were so awesome, people were tipping $10s and $20s.... but some guys needed to make change in the tip jar... Warhol's gotta feed his kids and stuff. 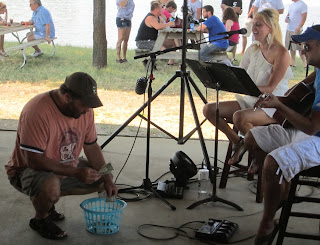 If The Teacher and Chili D weren't cool enough, turns out Sweetbreads can sing (of course she bleepin can... she just keeps getting more awesome... oh she can sing AND paint AND have great hair AND get raises while napping AND funny AND do yoga... I can't tell you how much a sista-in-law can't wait for THAT girl to join the family and make the rest of us look like old untalented dog s$$>... Anyway...) 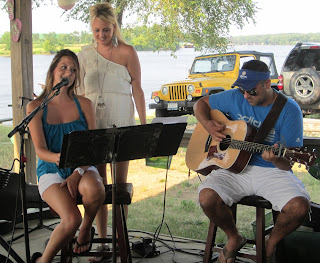 Two cute girls. I coulda sang if I wanted but it was really more important that I sit at the picnic table. Somebody's got too... 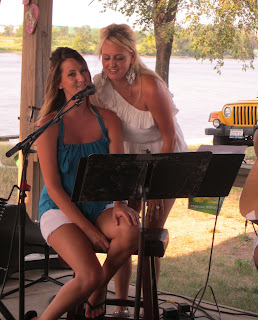 So as the Official Publicist:
Please come see The Band,
Tonight at the Boondocks 7:00pm or
Thursday at The Mansion Patio tentative Aug 2nd.
As of Yet, The Band is currently without a name.
Here are a list of my suggestions:
Teachin Chili D
The LC
A Bucket of Merlot
On Land (Play on names)
Wrigley's Puss (It's for their pets, perverts!)
A Guy and A Girl
Cats and Dogs

* If you would like to book The Band, please contact Flag Girl at : 1-800-She'snotgonnaanswer-cuzshe'stoobusysmilinatherrockstarboyfriend.
Posted by Tru Stories at 10:23 AM

1. A Guy and A Girl
(Because it is random)
2. A Bucket of Merlot
(Because I like Merlot)

I like Bud Light in a can. Can you work that into the name somehow?

They rock! I to like my beer in a can, I think the hooker is on to something.