This weekend, Dora and Diego (kissing cousins) set out on an adventure. Prepared to rescue absolutely nothing... except some solid adult time. The kind, where adults act like ridiculous children. 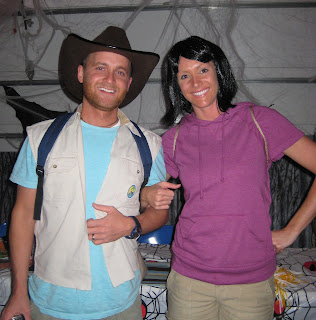 Arriving at our gracious hosts house, we were pumped for Halloween fun and Scavenger Hunt 2011, baby. 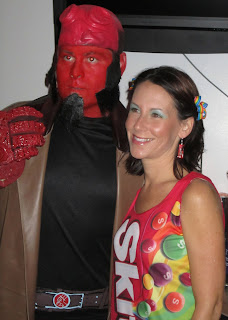 I whipped this hunt together, in maybe an hour or so... (try several weeks) threw a couple quick ideas together... (researched and provided a detailed theme centering around Spooky songs) ... basic locate a black cat, kind of stuff... (our possible arrest factor was at the highest level.) Clues Included: 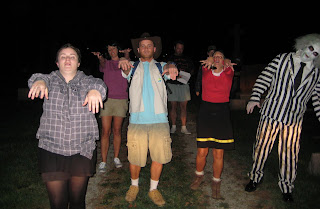 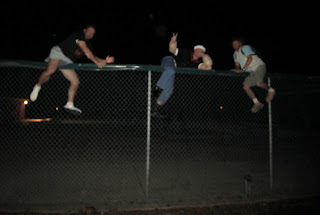 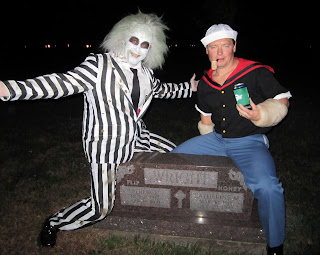 'In the Shadows' Locate a headstone with the number 13 printed on it. This one actually got just a bit spooky if you were not the person holding the flash light. 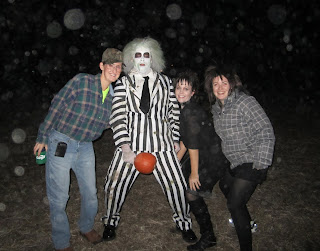 Children of the Corn. Taken in a corn field. 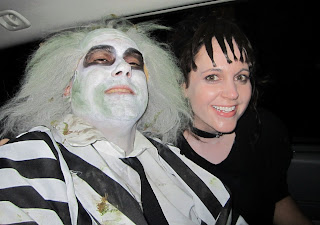 Flag Girl (Lydia) and Beetlejuice in our chariot.

There were MANY stops and MANY clues to photograph. But I'd rather showcase some costumes. 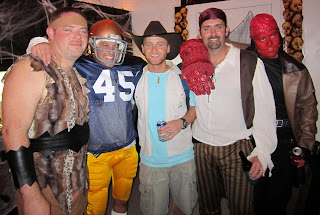 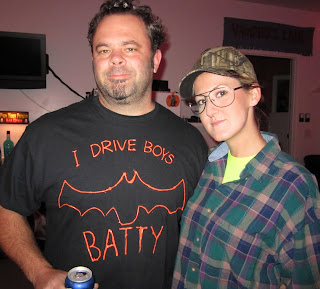 Warhol and Sweetbreads dressed very poorly
(or maybe very well) as the opposite gender. 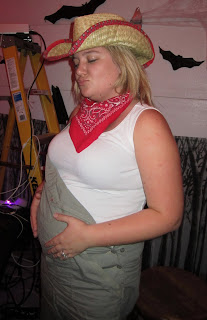 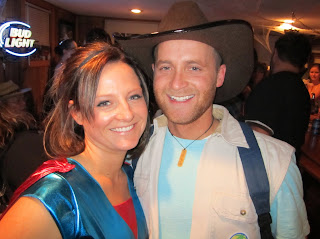 Coach with his favorite girl in photos. 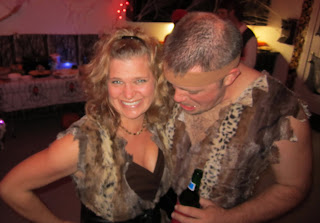 Is this weird... but did Mrs and General look almost better as Cavemen? Seriously, she was beautiful (and curvy!) and he is oddly hot in leg-warmers. 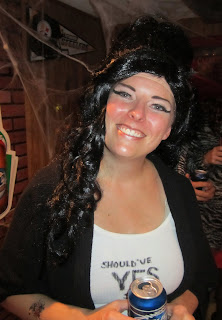 Winehouse: Thanks for letting our hunt repeatedly crash your party. You coulda said "No. No. No." 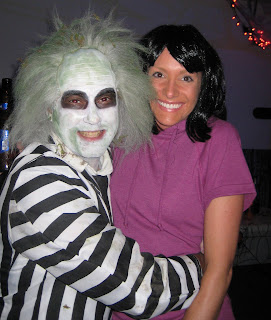 We know I don't care for hugging on a normal basis: this made me extremely uncomfortable. You can almost see the shiver moving down my spine. 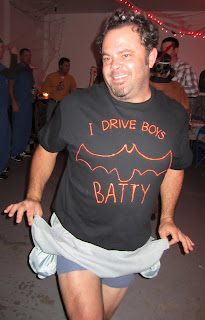 Oh wait... no, actually THAT made me extremely uncomfortable. Grandpa: you must be so proud of your eldest son. He is very pretty.

Finally:
Out of 4 teams, my team placed second. Upon further review, I declare WE are the actual winners. We first appeared to lose to The General's team by a mere 15 pts. 15 pts we would have earned with the best pumpkin smash (clearly ours was more dramatic.) Originally, the 15 pts were awarded to General's team. Except, I discovered later they actually smashed my child's pumpkin, from our porch.
The Clue clearly reads:

FIRST: You did NOT smash your recently purchased pumpkin. Therefore, that is NEGATIVE 10pts
SECOND: Judging based on location? -15 pts

Tink sadly declared this evening "Mom...I jus hafta use your husband's punkin for my jackolater because Ahkenna's daddy jus smashed my punkin."

Hear This: If people don't stop smashing my children's pumpkins (or smashing pumpkins on our vehicles)
The Hunt Master will retire from her post.
Plus, I'm nervous I can't possibly top this year.
Though Coach just told me: "Nobody actually got arrested last night, so you've got more in ya."

The last picture is so disturbing that know one will comment!

The best part was how happy Coco was. She had a Dora Mom and a Go Diego Go Dad. How disappointing that they turned back into boring parents.

1. I have a new wallpaper on my phone (thanks Ladyhol).

2. I declare WE are still the winner (and yes I realize I have no actual authority on this site).