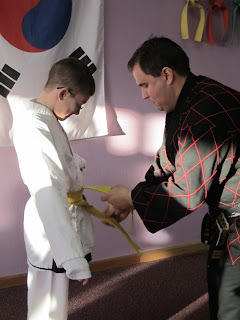 5:18pm: Bribed Tink into Tumbling clothes.
5:19pm: Told Coach to kill a spider.
5:20pm: Half of our group went to Three's game.
5:30pm: Took pink Cowboy boot Tink to Tumbling.
5:40pm: Picked The Kid up from Tae Kwon Do, while illegally parked in Alley.
5:46pm: Began watching Three play one of his very best games of Basketball ever. (We don't call him '3' for nothin.)
6:15pm: Coach raced out of game to pick up Tink.
6:54pm: Was (um... pleasantly?) surprised to realize there was a B game left to watch.
7:10pm: Grouped up with some In-laws at Turtles.
8:05pm: Fully aware I had a cake at home, ordered a Skillet Cookie for dessert.
8:07pm: Considered throwing something at Chili Davis, as he joked I would spend all of the next morning eating the Valentine's cake.
8:08pm: Secretly felt shame, as I knew Chili was totally correct.
8:13pm: Glorious Skillet Cookie arrived at table.
8:14:30secs: Tink HAD to go potty.
8:15pm: Stood outside door as Tink Deuced and Skillet Cookie melted.
8:16pm: Sadness and disappointment sank in.
8:55pm: Finally, got The Kid into bed.
8:59pm: Entered bathroom and admired brand-new Valentines Diamond Earrings from Coach, in mirror.
9:00pm: Remembered Coach only got me a card.
9:01pm: Took hot shower, in the attempt to clear my sinuses thanks to the 65 degree temperature jump, in last 3 days.
9:03pm: Ignored little girls knocking on door.
9:16pm: Used Neti-pot.
9:30pm: Watched DVR'd Grammys with Coach. Wondered out loud if Arcade Fire got stoned one night and decided to let whomever was in their apartment, join the band.
9:58pm: The girls finally fall asleep.
10:10pm: Begin flipping sides, in attempt to rotate breathing out of one nostril and then mouth.
10:12pm: Became panic-attack terrified, a spider may crawl into my open mouth, while I was sleeping.
10:14pm: Calmed, with the reminder, I would be eating cake for breakfast.

The Day AFTER Valentine's Day:

9:40am: Have already consumed two pieces of cake.

Was my Valentine's filled with Romance? Not really.
But it was pretty sweet.
Posted by Tru Stories at 9:10 AM

You had me at the diamond earings!

Call me when we go up for The Kids Red Belt Ceremony...

I've had a daaaaay. I'll be over for cake soon. Please save 1 piece.

i love that tink loves her cowboy boots so much! :)