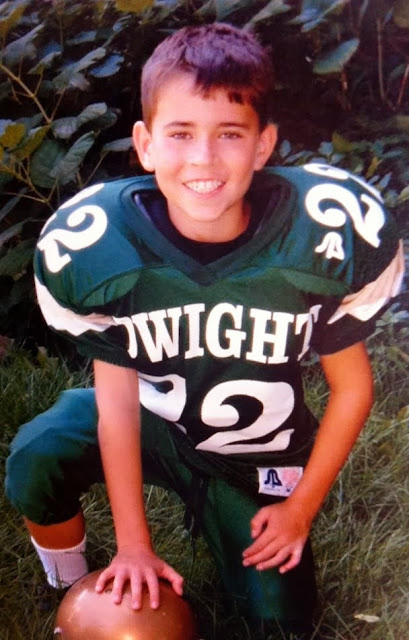 (Lil Jumbo Joe)
Tonight, Jumbo Joe will play his last football game under the home field Friday night lights.  He will be honored as a senior and proudly accompanied by his beautiful mother, Flag Girl. 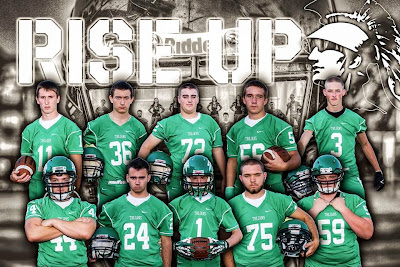 The only person who may be more emotional than Flag Girl about tonight, could be his Biggest Fan: Coach. In four years, Uncle Coach has not missed one of Joe's home games (or several away games).  Freshman, JV or Varsity.  He has been giddy, re-living the fun and excitement of Friday night Football. We've invited friends and family over for pre-pizza.  We have bundled up and walked (quickly!) towards the field.  We have sat in sweat during August and shook from chills in October.  Coach loves the people, the plays, the sound, the lights, he even loves the smell.
Of the four major seasons, Football Season is hands down, Coach's favorite.  It will be a long, looong three years while Coach waits for his son to (hopefully) play. 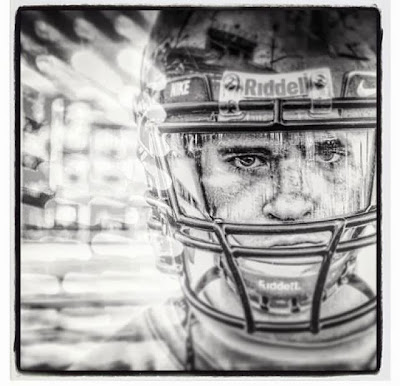 Big Two-Four (formally known as Two-Two)-
it has been our honor to watch you play,
To watch you grow...
You have made our family-filled Friday nights.
We'll miss you in the Green and White.
How bout it?? One more TD for the road...?
All our love-
Aunt Me and especially Uncle Coach.

You are such a handsome tough looking football player! Looking forward to seeing you one more time on the field. Can't believe you are a Senior! Love you much. Gramma G

- Jumbo Joe scored a touchdown!!
- The Commish and then Chili D started (ended) an argument with loud mouth WTs.
- It snowed a little.
- The hot coco was amazing.
- Tink and Coco went to a friend's house and weren't driving us crazy.
- I accidentally touched Flag Girl's boob...
- Doc drove up for the game.
- Last awesome pizza night.
- Did I mention Jumbo scored a touchdown??!!

Awesome game tonight, I had a great time watching you these last four years. I wish it didn't have to end so soon. Holla.

Damn this kid is cute! There will NEVER be a Senior night as fun filled as this one!

Thanks for all the great Friday Night Football Memories!

Thanks Coach and TS for all the great Pre-Parties. They WILL be missed.