Out of the Five siblings, it appears Flag Girl may be missing a 'Fabulous Claim to Fame'.
1. Warhol- The inspired Picasso of our region.
2. Doc- has literally Saved Lives. Human Lives.
3. The Commissioner- People are practically chomping at the bit to make him mayor.
And Coach- The seemingly flashiest celebrity of them all.  Swishing hoops, charming panties, high-fiving the masses...etc.
But despite all their glitz and glamour, Flag Girl has something no other sibling can claim.  She was (and still is) the only Varsity 'athelete' to compete at State.  Very impressive.  And yet, she maybe does not even realize her other very dubious honor.
At the age 10, Coach was asked to make a list of his Ten Favorite Things. In his life.  The list reads:﻿ 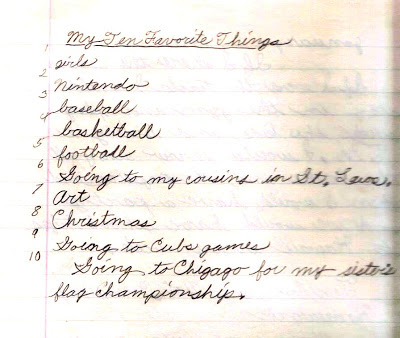 Yes, Age 10 and he listed: Girls.
But what else did Coach list as his Ten Favorite Things in LIFE?? "Going to Chicago for my sister's Flag Championship." Flag Girl's stardom, made a lasting impact on her brother's life.
To this very day...
On May 4th, our town will host our Spring Fest/BBQ Contest.  We have booked our Favorite Band Chili D and The Teacher, to play on the main stage.  Flag Girl kindly offered via text to choreograph a Flag performance to one of their songs.  When I mentioned the idea to Coach, he matter of factly stated, "If she really takes that stage for Flags, it will be the greatest thing ever, in the history Of The World."
When I told Flag Girl of Coach's comment, she simply responded: "True Statement"
Flag Girl- F saving lives or running town politics.... your baby broder has voted you, his Top Ten Favorite.  And that is an honor to take to the bank.
Posted by Tru Stories at 3:19 PM

I think a flag performance would be awesome. Could Flag Girl bring the entire team back together? Just make sure it is a short performance.
I would like to announce that Flag Girl has been voted Ms Hospitality of the BBQ Contest/Springfest. Our first Ms Hospitality. There are no crowns. Her responsibility, if she chooses to accept this honor, work the information table at the event.
No 10 year old likes girls. Really, basketball came in 4th? Also, did you mean Art or art?
Grammy

I almost feel like I may be a little bit responsible for some of his achievements...its like I paved the way!

Just one correction...Ummmmm I did not just compete at State...WE WON FIRST PLACE in STATE..2 years!!

I see FLAGGIRL has gone to one day. She is like Madonna without the singing.
Grammy

What girls did he know at 10? Wasn't he still at Sunbury?

I rode the bus with Flag Girl to one the the STATE champions!

I vote yes to the flag performance in May!!

I will be there. Front row. Wouldn't miss that for the world.

And how did Iowa trips with the local cousins not make the list?

(Is it weird that the most pervasive thought I had running through my head while reading Coach's list was, "Wow. Look at that penmanship! It's a real shame cursive instruction has been taken out of our school". And you don't have to answer that question, by the way. It was rhetorical, but I already know I'm beyond weird.)

So dad DID have good handwriting?! -The Kid

Ha! I was thinking the same thing. His penmanship was super good, and cursive should still be a requirement to learn. It just looks nice.
FLAGGIRL should do a performance @ the BBQ. HS girls will see her and realize how cool it is to be a flag girl!

1. I also noticed his handwriting. It's easier to read as a 10 year old, than to read it today.

3. NEVER EVER has the world SO begged for a Flag performance. EVER. Flag Girl- it is almost your duty to answer the calls of your public. Encore!

seriously... i cannot afford all these trips back to IL, stop being so awesome creepy Pleasantville town.