For the Rock of Ages, I secured feathers to my hair (because Steven Tyler likes him some feathers...) The next morning, I woke up and rather than carefully remove the feathers, I simply grabbed the scissors and chopped that section of hair from my head.  Whatev.
Coach was less amused.  I'm not sure if it was the blatant insult to his profession or maybe... it was my laissez faire attitude about my thick luscious hair and my confident assumption all hair can and will always grow back.
I guess, it's sorta like throwing my height around... like anyone can grow tall, if they want too.  Coach had a few choice comments about my chunk of hair, laying around on the shelf. 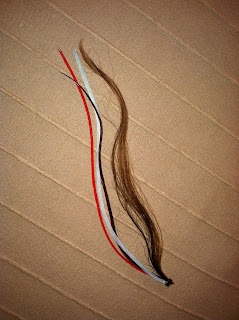 I have no idea, why he would be so sensitive.
It's certainly not because anyone gives him heck about his hair... or heck about many other things.
Warhol is currently painting yet another amazing mural, at a local establishment.  He is using Coach as a muse, for one of the scenes.  The character is a 'shadow' of his youngest brother.  Warhol snapped a pic and group texted a few of us the progress:

Sweetbreads: Sweet Stache!
Me: He can never grow that Stache. Ever.
Coach: I think the hairline might be a little exaggerated.
Me: Exaggerated in which direction...???
Coach: Duh
Warhol: Ouch.  I vote for Stache.
Warhol: And you're getting Lugz
Coach: Holla
Me: Maybe you should also paint his zipper down, if you're trying to make the painting authentic.
Coach: Now it's a party.
Sweetbreads: I'm getting uncomfortable.
Me: Coach is laughing hysterically at his reply.
Warhol: I know he is.  Me too.
Posted by Tru Stories at 1:47 PM

Warhol just keeps getting better. Maybe he should consider art as a profession.
The Page Turner

If you had posted only that picture of the work-in-progress, I would have immediately recognized it as Coach. Paint some shorty-shorts on him and it's Coach a la the 70s homecoming.

Here's the big question. Sooner or later, Warhol, you're going to run out of immediate family to use as your "muses". If you find the need to start finding inspiration from extended family please just give me at least a 6 month notice so I can lose some el-bees.

Not happy with the way this post started, but after the party comment I started laughing out loud again.