After months of planning (and not enough skit practicing) we gathered Saturday for our annual Relay for Life event.  This year, the majority of our profits were donated to our friend Kahuna, whom is suffering from kidney failure.  Not to worry: We still Hate Cancer, we just Hearted Kidneys a wee bit more.
We enlisted the help of Coach's extended family and added a few close friends to help with our event.  Our theme was Rock of Ages and for one night... we all became Rock Stars (at least inside our head.) 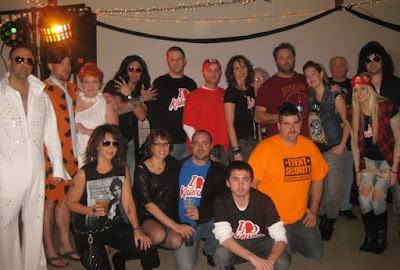 Arizona flew ALL THE WAY from Arizona, to attend our event!!  Exciting.  Unfortunately, she had to leave early (sometimes it sucks to be a mom on party night) but not before snapping a great blogger picture. 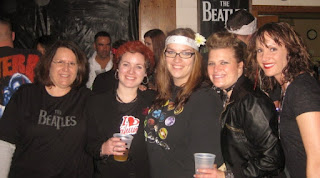 Promptly, at 10:00pm we began our annual skit.  This year, we took a variety of songs and movie clips to become 'musicians and /or singers'.  Hard emphasis on quote marks. And let me first explain, it is more difficult than one would imagine to create a skit around Rock Performances.  How many times can you watch us lip sync on a mic?  So a few very brave souls attempted actual real singing.  The end result was pretty spectacular.  On a 1-10 scale for Having Brassballzery. 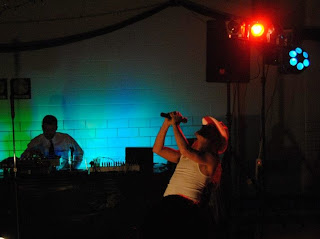 In a moment of brief insanity, I assigned myself the role of Steven Tyler, strictly based on looking the most like Steven Tyler out of our team.  (not necessarily a compliment to myself.)
I STILL have NO IDEA what I was thinking.
Friday night, during our final rehearsal, I literally had a minor (major) panic attack over my role.  While I do not fear many things, acting a complete spastic poor-dancing fool on stage, in front of a hundred plus friends... family... strangers..Little out of my comfort zone.
I'm more of a back-up dancer. 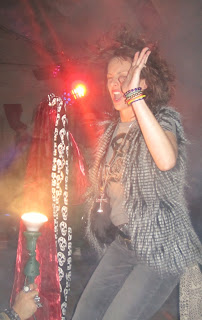 When I look at the pictures, or watch the video.. I honestly do not know who this person is.  I tru-ly blacked out during the entire (LOOOONG) 4 minutes.  I have no memory of what happened (except during the 3 seconds the music skipped... ouch.) 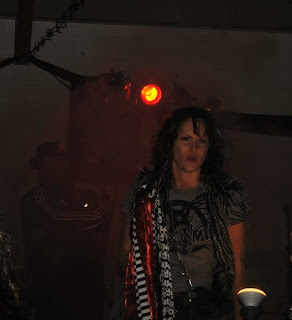 How do we continue to fly so outside of the box?  Over confidence?  Stupidity? Beer?? Take your pick. 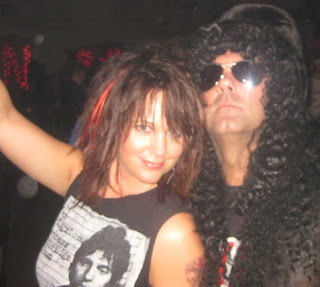 (Flag Girl and Slash, Too Cool) 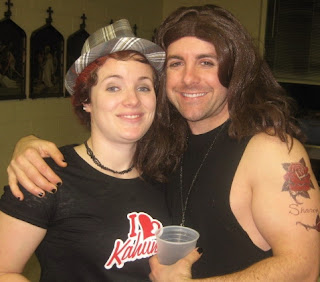 Weeks ago, I texted Munchkin asking if she was still willing to humiliate herself in front of The Boyfriend and if Yes, than to what level of humiliation??  She replied, All In.  I'd say this guy is a keeper. 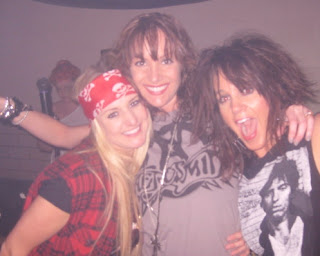 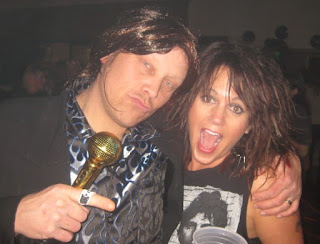 (Kahuna, the King of Rock!)
I really appreciate ALL our helpers: our DJ (smoke machine a hugely awesome addition!) our performers (especially our new addition: One!.... he's waited his whole life for that moment).. Great night.  Great family. I suppose.... I'll probably plan another.  But hopefully to a room of 300 guests!!
But... I probably won't hump another microphone stand.  Not anytime soon. I promise, Grandpa Art.﻿

Email ThisBlogThis!Share to TwitterShare to FacebookShare to Pinterest
Labels: Relay for Life Events

Nice to meet you Arizona, and does Flag Girl have any pics with her big mouth closed? Reverend Run Hol

Great pics, great evening. Except for the part where Arizona left early! And her sidekick BFF.
The Page Turner