Any regular blog follower is aware, I have been suffering hard core with puppy/baby fever. Obviously, we are not succumbing to the baby fever in this lifetime... therefore (dot dot dot.) It is no secret, Coach was less than giddy, over the dog idea. We had the opportunity to purchase or adopt several puppies, over the last few months. All the while, I resisted a puppy-impulse-buy.
I made a detailed list. If I could not find a dog, with the following qualities, I would simply be a mature adult and just not get one. (Trust me... it was tough.)

I knew I really wanted:
A small beagle.
Preferably under 1 year but older than 3 mos.
To rescue/adopt a puppy, which would benefit from being a part of my chaotic family.
I did not want a fancy breeder puppy. (mostly because Coach would have laughed me out of the house, over a $550 puppy price tag.)
And he/she HAD to follow the trend, of our pets being named after Beatles songs.

Via Aunt Sharon's Puppy Phone Tree... we heard of what just may be: The Perfect Find. Her previous owner, worked very long hours. Her already busy family, unfortunately just did not have the time, to attend to the puppy as much as they wanted. After a few happy phone calls, we discovered 'Maggie' a nearly 8 months, small female pure-bred beagle. Nearly potty trained and completely kennel trained. After some tweaking of her name, we proudly became her owners. Our New Puppy, Maggie Mae: 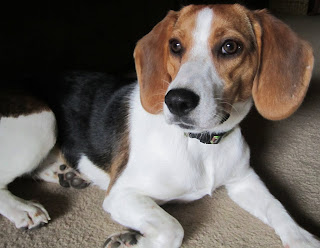 If her previous owners desired to give Maggie Mae an active home. They succeeded. In less than 24 hrs:
She walked to the busy basketball courts.
Had an early morning jog with Coach.
A bath, with Gentle Puppy Powder scented Oatmeal wash. With a new Tink-purchased collar.
A walk to Tink's preschool for a class introduction.
A ride in Daddy's truck
(FYI: Coach FORBADE me to call him a Puppy-Daddy!)
Visits from cousins. Plus Grammy and Pop-pop.
(who ReaLLy needed a puppy pick-me-up.)
A quick nappy on the couch with moi. (What!? Coach, did I say she was on the couch?! Whoops, I meant... um, on the floor next to the couch.)
And several successful games of fetch. 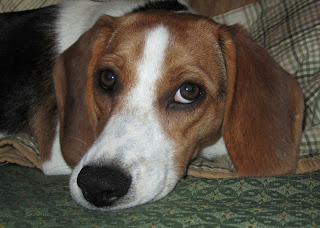 Our only stumbles thus far:

1. Yes, I was standing outside at 6:25am this morning. And yes, that is very early for my notoriously precious morning sleep. That said, Maggie Mae entered her evening crate at 10:45pm and slept without a peep, until 6:20am. I can barely get my three children, to sleep so soundly!!

2. Maggie Mae is newly excited and eager to explore her surroundings. And ironically, she loves just as hard as our Coco likes to hug. The combo of the two, left for a pretty rough knock-down, make-out session... resulting in a very cautious and nervous Coco.

Overall, I have a pretty great feeling about this.
AND... isn't she super cute!!??
Posted by Tru Stories at 4:02 PM

Maggie Mae came into our lives on such a down day. It was a giant hug the family needed. She is a beauty. Sad for Maggie Mae's first family, very happy for the new family.

i knew coach would cave! she is cute though! ;) i will remember how cute she is in about a year....haha

love dogs, mine are just hyper!

I recently stepped in a GIANT pile of dog crap with one of the only pairs of shoes that currently fit my fat feet because 1 of our 2 dogs is so bleeping dumb she doesn't choose to poop in the entire 2 acres of yard, she picks the driveway. One of many reasons this dog is a dumba*#. Therefore I'm not currently much of a dog fan, but I will say Maggie Mae is super cute. Like CT said, I hope she's still cute in a year!