Inside the Parent with an Elf

It's been too long since I posted.
Maybe we've been insanely busy.
Maybe I've been waiting to see if any body else would wish The Kid a Happy Birthday... (only 4 comments?)
Maybe we go to basketball games every night and hosted Thanksgiving and etc.
The show must go on.

The Elf on the Bleepin Shelf:
We purchased our elf years ago.  We were one of the first families to jump on this trend.  Our Elf is a boy and The (young) Kid named him Flash (because he's so fast yada yada...) Way back when this trend began, The Elf was meant to be a Mall Santa within your own home.  Watching daily to see if your child has been naughty or nice.
Now Elves are causing mischief and decorating rooms, gathering other toys.. How does the Elf have time for this?? Isn't he flying to and from the North Pole? Our Elf can barely remember to jump from one shelf to another only feet away.
I was browsing The Net the other evening and showed this idea to Coach: 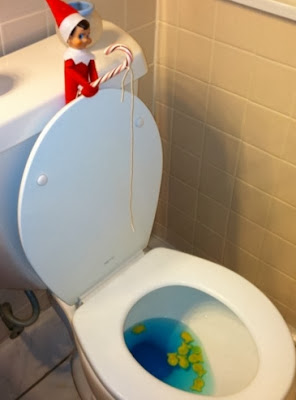 He looked and immediately started shaking his head: No. Nope. I don't like that.  That makes my belly hurt.
Me (laughing): What do you mean?!
Coach: I don't know... it just makes my belly feel funny.  The floating goldfish.. it's not right.  I don't like it.
Me (really laughing now): Why?  You know, no one is going to make you eat those floating fish?!
Coach (not laughing, he's totally serious): No.  I don't know that.  That water is too blue.  The fish look weird.  We're not doing that.
After The Kid learned 'The Truth' we (gladly) gifted him two important holiday season jobs.  1. He is the Elf Checker.  He checks each morning to see if we have forgotten to move the Elf, if we have forgotten (which happens often) he gets to move it.  2. The Kid is the Santa cookie eater, milk drinker. Thankfully, because I am NOT eating one more cookie that a grimy little girl has touched.
Any way... where is this rant headed??
Well.... tonight, our Elf is undergoing a Sex Change. Tru Story.
The girls have been bummed for years that they have a Boy Elf when everyone in their whole world has a girl.  This weekend, while in Target, I spontaneously purchased Elf skirts.  And declared to Coach, We're giving our Elf a sex change.
As you can imagine, his reaction was priceless.
Turn in tomorrow, to read the entire process.
Posted by Tru Stories at 9:09 AM

Do girl elves have short hair too?
Grammy

Girl elves have short a totally fashionable pixie cut, necessary to show off her cute earrings.

I'm with Coach; there is something upsetting about the disintegration of those goldfish crackers in toilet water.

I wish the Elf was invented when my kids were young. I think its such a cute idea. I like the toilet idea....but I wouldn't have the stomach to look at it the next morning.

The Kid got a "text" Happy Birthday shout out from this girl..so me and him are cool....sometimes the comment section wears me out just to get thru the stupid words I cant read!!