Three Reasons why we love Tink.

In just 24 hours, Tink proved three times, why this blog was originally written with her as the inspiration.
1.  Her School Christmas Pageant:
She was asked to wear plain black leggins and a plain green or red shirt.  To match the other elves in her grade.  We put on the required outfit but then, Tink says "You know... Elves like tall socks.. and you know, Elves like sparkle socks and probably sparkle shoes.. Elves would REALLY like that.. really" And then looked me square in the eye to emphasize her point.
So she wore sparkle leg warmers. 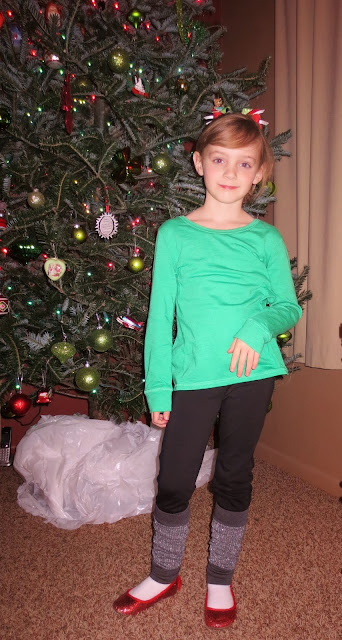 2. Yesterday, while practicing for the Church Christmas Pageant... Tink was front and center, with two of her other mini First Grade Friends.  Each child is standing sweetly in their spot.  On the large, Catholic alter... then, while calmly singing Silent Night as a group, Tink suddenly rocked out the Air Guitar: on her LEG.
Moments later, she head-banged during Joy to the World. (I mean.. that makes a little more sense than a Silent Night leg Air Guitar...)
The actual program during Mass on Saturday, may get reeeeal interesting. Gramma G- Maybe you'd better stay home.  Or at the very least, cross yourself a few extra times for your grand-daughter's soul.

3. Just hours after the air guitar... we gathered at the kitchen table to write letters to Santa.  Each child is allowed to ask Santa for one important (yet reasonable) gift.
Below, is Tink's actual letter. 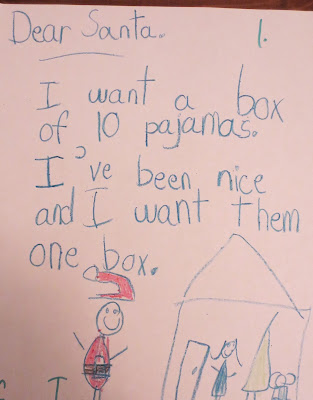 Yes.
Tink is asking Santa for One giant box, filled with 10 pairs of pajamas.  Tru Story.  You may also notice the (1.) in the upper right corner... she snuck that in at the last second, before the letters went into the envelope.  She wrote that, to make sure Santa read her letter before reading her sister's letter.
I honestly can not make Tink's stories up.
Posted by Tru Stories at 9:35 AM

Email ThisBlogThis!Share to TwitterShare to FacebookShare to Pinterest
Labels: Tink

TInk's handwriting is as nice as her dad's.

The great thing about Tink is she is unique. Does her Tink thing. Love that girl.
Grammy