After two years of constant "Why can't we have a girl Elf??" complaints, we decided to give our boy Elf a lil Sex Change.  When I presented the idea to Coach, he barely reacted with surprise and simply responded "We're doing WHAT with the Elf??"
We're performing a Sex Change.
Because nothing actually changed on our Elf (I'm certainly not shelling out the cash to purchase a whole new Elf kit)... I decided what we needed was a back story.  First the girls woke up to a note on the kitchen table, which read: 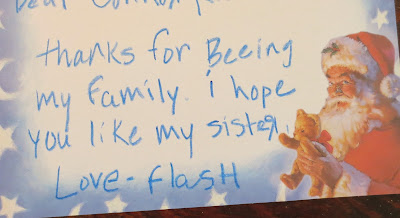 Oh... Elves can't write or read good... funny little uneducated elves...
See, it makes sense the Elf looks the same, because they are brother and sister.  Get it?!  Next, I decided to name the Elf myself.  I thought both names should start with an F.  And because this house is Tinkerbell crazy, I choose 'FiFibell' as the new name.
I asked Coach: What do you think of FiFibell?  Is it too much or just right?

Coach: Doesn't matter to me... I'm still just gonna call it The Elf.

Coach is fun and festive.
Next, I set the scene.
I decided the little sister would want to arrive with more flair than her very boring big brother.  I dressed her in the new skirt, posed her sweetly, threw marshmallows every where and sprinkled glitter all over her. 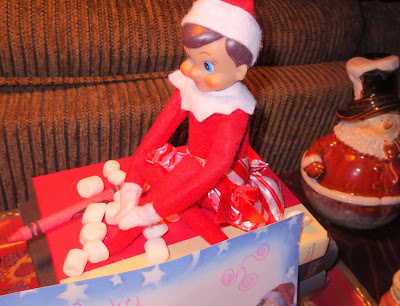 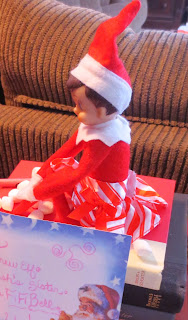 I became nervous this was not convincing.  I worried this idea could blow up in my face and actually cause the girls to realize this whole elf thing is a scam.  I started questioning Coach "Is this enough?  Should she wear a Barbie tank top?  What else can we do??"

Coach pretty much ignored me.
Me: You're really not helping at all?  You could at least offer a suggestion or pretend to listen as I bounce ideas off you...

Coach: I don't know what to tell you!  I've never given a doll a sex change before!

Me: Me either!
(pause)
Me: Well... I guess that's not true.  I once cut off all my Barbie's hair to try and turn her into a Ken doll.  It didn't really work.

Remembering that Ken mistake did nothing to help my anxiety. 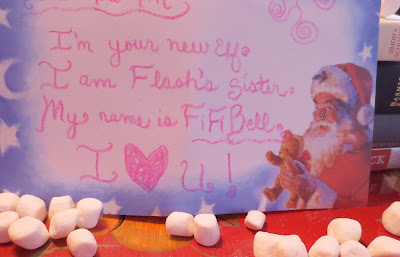 It went perfectly!
We smiled and played dumb.  Pretending to be just as excited and surprised as the girls.  (well... Coach at least raised his eyebrows a couple times..) I'm not sure why I worried.  We live in a fairly liberal and LGBT sympathetic home.  Our children are cool with change.  No biggie.
I figure, I'll place FiFibell in a few overly girlie situations over the next couple nights.  And then ease into ignoring her, just as much as her big brother.
Holiday cheer and all that...
Posted by Tru Stories at 10:45 AM

I just thank God I did not have to deal with an elf when you kids were young. I'm reading all the extremes parents go to. Unreal!!! The best part of this is that I know you have about 100 other things to do. That was time well spent!!
Grammy

I would like to draw your attention to the following words written last year:

Dear ElfieBell Snow.. or Whatever the Hell your Name is: As a seasoned Elf (currently in my 4th year) I feel it is my duty, if not obligation to inform you of a few matters which need your attention:

First: Your name is ReeedickQulous!!
ElfieBell Spar.Kle Snowflutter Flake or WhatEv?? You need to grow up. My name is Flash. Named by The Boy years ago. Simple. I'm fast like a Flash of wind in the night. A real man's name, if you will.
.
.
.
Elfiebellsnowfluttery: We don't all gotta be Pretty Little Show-offs all the time... at least, that's what I've heard The Mom, tell The Dad before...

PS- Your skirt is gay.

*******
Welcome to the club! Also, confirmation that elves are dumb: Elfiebell spelled Elaina's name wrong on her scrabble board message two nights ago. Elaina's parents are equally dim as they didn't notice the error until Elaina pointed it out almost 12 hours later.

(PS - You should have drawn on some earrings. Girl elves long some bling.)

Make the girl elf a scarf. It will be adorable!
Seriously, all of you are so ridiculous!!! I cannot believe there is a super rich person out there that came up with this idea. I am starting to think it is really a competition for the adults. We will see who can top this!
Grammy
(Wonder if Sassy would enjoy an Elf? To eat....)

Mrs.
I still stand by and agree with every single word I typed in that post.
I hate myself for what I've done.
I just COULD NOT stand listening to the girlie complaining.
I'm weak.
I'm not proud.