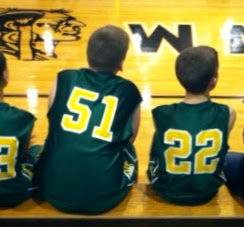 (The Kid, at his game)
While watching "We Bought a Zoo" with The Kid
(a movie about a father, with two kids, whom lost his wife) I asked The Kid and Coach a question.
Me: How do you think Dad would manage if you guys lost me? Do you think he could handle it or would life be a mess??
The Kid: I think Dad could manage. But things would be different because we'd probably be living on an NBA bus, traveling all over the country.
Me: You think if I died, Dad would start playing professional basketball??!
The Kid: Probably.  And he'd drag us with him.
Me (looking at both of them in surprised disbelief):
So what you're saying is... without me in his life, Dad would be a professional athlete??  Because being married to me, is the only thing that has been holding him back from the NBA?!
The Kid nodded.
I looked at Coach.
Coach shrugged his shoulders knowingly, raised an eyebrow and smirked a little: Listen... I didn't say it... but The Kid knows what he's talkin about...
Un.Be.Lievable.

You and 6 inches is the only thing holding him back. Plus, isn't 30 starting to get old in the NBA?
TS why don't you ever let Coach play basketball? Wouldn't your life be easier if Coach was a professional?
Popop's Comment: Like the NBA travels around on buses.

That six inches comment is making me uncomfortable, Page Turner.

Is the Kid the giant or the midget in the picture?

We all know the kid is intelligent, who are we to question him.